Saturday Sidebar: What do your children call their grandparents? 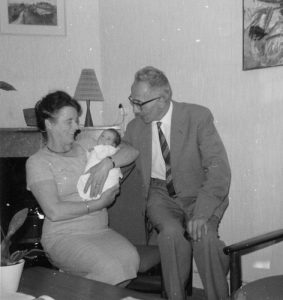 In honor of grandparents’ day celebrated in some parts of the world this weekend, Karyn asked our writers,

“What do your children call their grandparents?”

Carol @ If By Yes of British Columbia, Canada writes:
“My mother in law is Grandma, because all her grandchildren call her that. My father in law is grandpa for the same reason. My mother is Nana, and my father was going to be Grampy, but Owl seems to have labeled him Ba Ba. A lot of the boys on my dad’s side of the family say “Bramy” for grandfathers.”

Eva Fannon of Washington State, USA writes:
“My kids call my parents Abuelo and Abuelita (Spanish for grandfather and an affectionate way of saying grandmother). They call my husband’s parents Pop and Grannie.”

“They call their paternal grandfather, who is from Turkey, Buyukbaba which is Turkish for “Great Father” and their paternal grandmother is Grandmama. Though my parents are both deceased and they never met their maternal grandparents my mother is referred to as Bubbe which is yiddish for grandmother, and my father as grandfather. We went with the cultural variation where we had them so yes, we have the Muslims, Jews and Christians represented in our children!”

Hamakkomommy of Japan writes:
“My kids call their Japanese grandparents Jiji and Baba, which comes from the Japanese words for grandpa (ojiisan) and grandma (obaasan.). They call my mom Nana, her choice.”

JPrestholdt of Minnesota, USA writes:
“My mom’s name is Cynthia so she is Grandma CC. But my dad’s name is Perry, so the joke is that he is Grandpa PP. My MIL is Sugah (she’s from the South in the US and always called her boys “Sugah” (Sugar). My FIL is Fez. His wife, their other grandma, they call Mimi.”

Karyn Van Der Zwet of New Zealand writes:
“My parents are Granny and Grandad, Craig’s are Oma and Poppa and my grandmother they call Grandma – because that’s what we always called her.”

Lady E of Indonesia writes:
“My son calls his grandmother from the states “Memo” and his grandfather is “Bampa.” His Grandmother from Ghana is Aunty Rose, or sometimes Grand Rose.”

Maman Aya of New York, USA writes:
“My mother and father are Safta and Saba (Hebrew for Grandma and Grandpa), my stepfather is Papa (which is typically what the Italian Americans (well at least in NY) tend to call the grandfathers and he’s Italian :), and my mother-in-law is Cranny (a family joke that started about 30 years ago). My grandparents are Grandmaman and Grandpapa (in French). A very multicultural family indeed! :-)”

Mamawearpapashirt of Singapore writes:
“My kids call my mum “Nai-nai” (Chinese for granny) and my dad “Gong-gong” (Chinese for grandfather). For the paternal side, it’s “Ah-ma” and “Ah-gong”. To be honest, I don’t quite know the subtle differences between the two sets, but as long as they know who they’re addressing, it’s okay with us. ;)”

Mamma Simona of South Africa writes:
“Nonno and Nonna (Italian for Grandma and Grandpa) followed by their first names, to differentiate between them. However, my stepdad is referred to as “Uncle Jurek”.”

Margie Bryant of Arkansas, USA writes:
“My children only have my mother, Dad and stepmom as their father isn’t in picture. So my mom is Nanny/Granny, Dad is Pop and step mom is Grandma.”

Martine of Philippines writes:
“Here in the Philippines, we have different terms of endearment for our grandparents. My son calls my husband’s parents “Pa” and “Ma,” while my parents, he addresses using the traditional Tagalog words: “Lolo” (grandfather) and “Lola” (grandmother).”

Tara B. of Washington State, USA writes:
“For each set of my children’s grandparents, we use the terms my husband and I used for our grandparents. So, on my husband’s side, that’s Grandmom & Grampy. On my side, it’s Grammy & Pop Pop.”

Tatterscoops of Indonesia writes:
“My son calls my parents Oma (Grandma) and Opa (Grandpa) these are originally Dutch words but because Indonesia was a Dutch colony for so many years, some of the Dutch words are now ingrained in our everyday language”

Purnima of India writes:
“Maternal grandma is ammama (Amma’s amma) and paternal is paathi. My son calls both grandfathers as thatha. They are all Tamil (my mother tongue) words. My grandmother is called ‘great’ because she is his great grandmother. And she did something fabulous for him, sometime back and he commented that she really is great, being a great grandmother, hence the name stuck!”

TwinMom112 of Pennsylvania, USA writes:
“‎”Nammy” – My daughter couldn’t get the “G” for Grammy! lol”

By Word of Mouth Musings writes:

“We have a Nanny and GanGan, since that is what my oldest put together as a baby and it stuck for all the grandkids, even on my brother’s side. My mother in law is Nana and my father in law who is divorced from her, goes by Mike … don’t ask 😉 ”

“My parents are Grammy and Pop.”

What about you…What do your children call their grandparents?

Tell us how you celebrated grandparents’ day.

Don’t forget to visit us tomorrow to check out the travel itinerary for next week, put together by Kirsten Doyle!