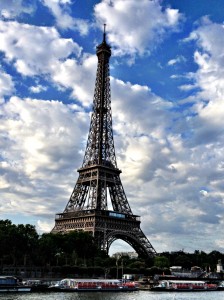 My family and I moved to Paris, France seven months ago on an expatriate assignment through my husband’s employer. Before moving here, we lived in many northeastern states in the U.S., including Connecticut, New York, and Massachusetts. If I had to choose a place to call home, it would be Boston. We loved attending college in Massachusetts and we have so many great memories there.

English is my primary language, which has made life in France very difficult. I blame my father for my lack of French-speaking abilities (sorry Dad)! In the seventh grade, I had the opportunity to pick French or Spanish to study as a second language. I desperately wanted to learn French, my paternal grandmother’s native language, but my dad was insistent on me learning Spanish. Since moving to France, I’ve been trying to learn the language but often find myself using Spanish words instead of French. It makes for interesting conversation!

I became a mother in September 2009 to a beautiful little boy named HJ. Before that, I use to call the students I worked with “my kids” but after parenting my son for the last three years, I now realize that I was nowhere close to being a real mother.

I quit my job in September of 2011 as we were preparing for our expatriate assignment. Prior to that, I worked as an individual, group, and family therapist at a special needs school. Being a mother has been the most fulfilling experience of my life, but my job at the school is a close second. I miss my “other” family every day.

I started out blogging because I was used to working full time and needed something to fill the three hour gap in my day while my son napped. It also kept me sane while we were living in a hotel for 100 days awaiting our visas to be approved. I love blogging and am so grateful for all of the wonderful people the interwebs have brought into my life.

I’d like to think that I’m not. I often think that seeking out our differences is what drives us apart as mothers. Instead I’d like to think I’m like every other mother, in any country in the world. I have hopes and dreams for my child, fears and anxieties about “doing it right.” I make mistakes like other moms; take pride in watching my child like other moms. If I had to pick something that separates me from most moms, it would be my experiences working with kids who have significant, poly-diagnostic mental health profiles, like combinations of Autism, Anxiety Disorders, and Schizophrenia. I also have a bad habit of loving to watch reality television (shhh).

There are so many voices in society; the media, government, educators,  other parents… all there influencing mothers and dictating how they should parent their children. Many of the information we take in contradicts one another, making mothers feel unsure and anxious about their own choices.  The challenge in today’s world is finding what speaks to you as a mother and subsequently developing your own voice.  As a mom, I seek to raise my son with an open mind and a loving heart. I hope he retains his natural patience and inquisitive mind. I want him to understand that there will be times when he will fall and we won’t be there to help him; in these times he’ll learn and grow, and become a better person.

I think it was a three-pronged attack at BlogHer’12! I was lucky enough to hear Nicole Melancon speak out during a travelanthropy session, then connecting with Lady Jeanie at breakfast, and then meeting Caroline Barrett at the Shot@Life booth in the Expo Hall. All said the same thing, “Have you heard about World Moms Blog?” When I got home, I checked out the site and realized it was what I had been looking for when I told them I wanted something more out of blogging, and I am so honored to join such an amazing team.

This is an original post for World Moms Blog.  Jacki writes at  HJ Underway.

Photo Credit to the author