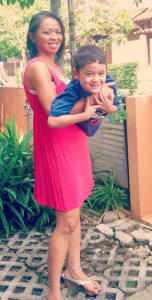 For almost 5 months, I’ve been changing my life in a way that I never thought possible before. First, I joined a gym and was working with a personal trainer 3 to 4 times a week. Then, I revamped the way I eat.

My son became used to “Mommy, are you going to the gym?”, when I kissed him in the morning if he woke up before I left for my 6 am session.

He’s getting used to it.

My weight has been an issue that I battled for years. As an emotional eater, my weight went up and down like crazy over the last couple of years. I tried many things, from crash diets to those magic ‘drinks’ that are supposed to make you lose weight. None of them worked, they were only temporary fixes.

I didn’t sit and plan that I was going to start changing my life. Actually, it was a spur of the moment kind of thing.

I was driving pass by the gym when I saw their promotional banner and thought to myself, “Hey, that’s cheap! I can spare that much.” So I just stopped by the next morning after dropping my son at school and signed up.

A week later, I hired a personal trainer, and my life was forever changed (as I’m writing this, I no longer work with him). Another influence that pushed me to push harder and live a healthier lifestyle is the fact that diabetes runs for many generations back in my family. I do not want to pass that down to my son, too!

As my body changes, my energy level improves, my body fat percentage went down, my son realized the changes in his Mommy too. He knows his Mommy is happier now.

He would ask me to show him the moves I did at the gym, and happily he would jumped right in and do his own kiddy version of it. He even try planking with me.

My son is in K2, and his play time outside is limited. Why? Because, where we live we are surrounded by houses and houses. The closest park is filthy, and we have to pay to go to an outdoor play area which is quite far from my place. I do, however, let him play outside by the street supervised.

Once he starts elementary school next year, I will encourage him to join some sports group of his choice, but for now he mostly only plays outdoors at school.

My own mother was a volleyball athlete back when she was in school up to the day she got married. But after being a stay at home mom and raising three kids, she has been big all my life. The only proof of her fitness figure was from old pictures. Sadly, she was diagnosed with type 2 diabetes last year. I don’t want to end up like my mother and as much as I love her, I wish she would lead a healthier lifestyle.

One of my brothers has started to show interest in joining the gym, too, so I am delighted for that.

I know I can’t change her or force her to eat better and start exercising, but I know there is still one person I can influence.

Knowing that I am setting a good example for him, by being a healthy and strong mother, I know my son will not only be proud of me, but he will follow by example.

How about you? How do  you incorporate healthy lifestyle in your family?

This is an original post to World Moms Blog by our single-mother of one, Maureen of the blog, Tatter Scoops, of Indonesia.