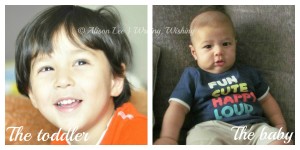 He is relaxed, his head lolling slightly on my shoulder, mouth open just so, tired eyes finally closed.

I feel his weight, comfortable in my arms, all 15 pounds of soft baby and fuzzy hair, warmly nestled where he should be.

I listen to his gentle breathing, slowing, as he falls into deeper sleep. Only then, do I dare lower him into his crib, tucking him under the linen swaddle blanket.

I watch my almost-4-month old sleep for a few more minutes, willing him fervently to stay asleep. Quietly, I creep out.

Already, I miss his solid babyness in my now empty arms.

I joked once that with two children now, my arms will never truly be empty.

That is my truth, and a reality I love.

For no sooner do I lay the baby down for his nap, my toddler comes barreling into me, throws his arms around my neck and I’m surprised at how big he seems.

We walk hand in hand, his small one in my slightly big one. I marvel again at how much he has grown, his fingers once a third the size of mine, now half as long.

His head, a mop of messy brown hair, was once fuzzy like his baby brother’s. I muss his not-so-little head, and wonder when he grew so tall, he’s reached my waist.

We paint, we read flash cards, we play ‘tickle’. He’s all arms and legs, doing all sorts of running, climbing and tumbles.

His once baby fingers, now deftly opens paint bottles and points out animals in books.

His eyes crinkle when he smiles – even as a baby, he smiled with his eyes, one of my favorite things about my firstborn.

At nap time, we nestle together in his bed and I push past the discomfort of being squeezed into a single bed.

Instead, I focus on holding my firstborn close, coaxing him to sleep, and fighting the urge to giggle when he tries to put his finger up my nose.

As he shifts and turns and finally settles facing me, I remind myself that not far in the future, he will no longer want to cuddle with his mother. And so I soak in the moment.

I pick up my now alert second son, fresh from his long nap.

I lay him down on his quilt and we play peek-a-boo, sing songs and roll around in general silliness.

I hold his tiny hand, knowing that some day, sooner than I can imagine, it’d be just like the toddler hand I just held.

I play with his tiny feet, knowing that some day, sooner than I would like, they will be making pattering sounds around the house.

For now, I will enjoy the physicalness of his babyhood – the strong kicks his chubby legs make, just like when he was in utero; his fingers around mine, his head on my shoulder.

For soon, it will be the physicalness of toddler-hood, just like his big brother.

This is the tangible part of motherhood I love so much. Feeling their hands in mine, hearing their voices and laughs, squeezing them close to me.

This is love in all its physicalness.

What physical aspect of your child do you love the most?

This has been an original post to World Moms Blog by Alison Lee in Kuala Lumpur, Malaysia. She can also be found blogging at Writing, Wishing.

Alison is a former PR professional turned stay-at-home mother to two boys. Growing up in a small city of Ipoh, Malaysia, Alison left home at 17 to pursue her studies in the big city of Kuala Lumpur. At 19, she headed to University of Leeds in England and graduated with a degree in Communications. Returning home to Malaysia in 1999, she began a 10-year career in public relations, event planning, and marketing, working for various PR agencies and one of the world's biggest sports brands. After a decade of launch parties and product launches, concerts and award shows, international press junkets and world travel, Alison traded all that in for a life as a first time mother in 2009, and has not looked back since. Aside from writing for her blog, Writing, Wishing, Alison is the Founder and chief social media strategist for Little Love Media.

Like Loading...
« Travel Itinerary for the Week of September 3rd!
SOCIAL GOOD: The power of a voice »