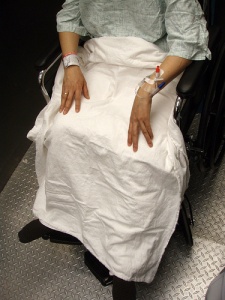 Today, I am going to share the story of how my son came into this world.

Warning: this is an ultra long post, so please make your self comfortable, curl up with a tea or a drink, and read on.

Ahem,  one more thing – the post below may get quite graphic, so please read at your own discretion.

Okay, now those still with me, please continue.

As I entered my 9th month of pregnancy, I went for the routine check-up, which were now weekly. The doctor found that the baby was underweight, and that I had some serious feeding to do.

To speed up the process, the doc also prescribed some medicines that were to be taken intravenously, kind of like a glucose drip, over a period of 6 hours every three days. This was in addition to all the feeding frenzy going on at home. I was expected to be in bed at all times, staring at the ceiling or sleeping, except if I wanted to use the bathroom.

I was getting agitated about the delivery, with a feeling of impending dread. How I longed for those carefree days when I no longer had to carry a football protruding from my belly!

When I was in office (and even at home), I had heard other mothers express the same feeling: “When the kid is inside you, you just want it to come outside as soon as possible. When the baby is finally outside and has to be taken care of, you wistfully start wishing it were back in your belly, and you didn’t have to worry about feeding schedules!”

I suppose I was in the phase where I just wanted the baby to come out as soon as possible. My due date was March 5th, and I was hoping that I would have him in my arms during the last week of February, and have some free space in my belly.

We went into the hospital on Feb 25th – the last date for my routine weekly checkup. The doctor pronounced that the baby had gained enough weight and was quite ready to come out.

As I was admitted, the doctor discovered that I had contracted a vicious cough – a definite no-no for a woman ready to deliver a baby. The doc started feeding me all kinds of antibiotics, trying to keep the cough at bay. My blood pressure had begun to shoot up – probably because I had begun feeling nervous about the birth process.

On the appointed day, March 1st, the doctor had asked that I be ready early in the morning, as the nurses would be coming by at 4:30am to take me into the delivery room. I walked in with the nurse  early in the morning. The labour room consisted of a row of beds (like a dormitory), each having a curtain hung around it. When I walked in, all the beds were deserted except for one at the end. There was a woman there, in the throes of the pain, and she was moaning quietly every few minutes. The nurse said, “She has been there since 8 last night.” Imagine, eight hours of labour and she still wasn’t close to delivering.

The nurse handed me a dark green hospital gown and asked me to change. After changing, the nurse started shaving the pubic area and then gave me an enema. I had read of enemas, but this was the first time I got to experience one. It was NOT a pleasant experience. Since I had been told that the enema would make me want to use the bathroom pretty quickly, I was waiting for some pressure to build up. I suppose I didn’t wait long enough, as you will soon see. I went to the bathroom, did the deed, and came back to my bed. Soon the nurse gave me 2 to 3 injections, all testers for allergies, and then gave me the real stuff. By now, I was quite used to being poked by needles. These didn’t ruffle me at all. In view of the greater pain that was yet to come, I could swat these away like mosquito bites.

I just laid there until seven, with none of the dreaded labour pains. In the meantime, the labour room was getting more active.  By now, almost all the beds were occupied by women, each in differing stages of the pain. The woman I had seen in the morning had already delivered her  baby. Another one was all prepped for a normal delivery, but was then told that she had to have a C-section due to the odd position of the baby. Most had the curtains for  more privacy, considering the semi-private gown they all wore.

After seven, there was a sudden flurry of activity as the doctor suddenly rushed in, followed by a bevy of nurses, all heading towards a particular mother-to-be. After examining her, the doctor said, “Thank God! When I got the call, I just rushed from home. We still have time.” It seemed some of the staff  in the Labour Ward grew a little anxious after checking her, and immediately called the doctor.

The doctor was a lady of 75 years. She was thin and strong, and had a slight quiver in her speech. She was one of the most respected doctors in the area, and had the reputation of delivering the baby safely in every case she attended. This has to be stressed, because there were often cases where the attending doctor failed to catch the baby when it was being delivered, or accidentally dropped the baby. So, now that she was there, she decided to check up on all her patients, starting with me. She checked me, the baby’s position, and then instructed the nurse to give me another injection.

This was an injection to speed up the labor process. Within half an hour of being injected, I started getting a hint of what was to come. I began to feel slight twinges, which slowly progressed to something more. All I had to hold on to were the cold rails of the bedstead. The rule was that no one was allowed into the hospital, neither the husband, nor the woman’s mother. That was one time I wished with all my heart for a hand to hold, especially when the pain rolled in.

My friends, who had already been through the birthing ordeal, had told me that there would be a nurse to rub your legs or your stomach, and to just be with you. But there was no one here – it was like Coleridge’s poem ‘The Rime of the Ancient Mariner’ –

Water, water everywhere, but not a drop to drink.

I was surrounded by people, but not one who cared enough to even bother looking this way or holding my hand.

Soon, I knew what was meant by labour pain. Just like everyone had told me, when the pain came, I forgot everything and just wanted to die. When it stopped, it was like there never was any pain. Soon I was rolling about the bed (as much as a fully pregnant woman can roll) in pain. And, wonder of wonders, I felt like I had to poo.

I did it in full view of everyone who was there. Little did I know that this was something that should never happen, and was a very serious occurrence. I ejected everything (except the baby) in a stream of brown water, and simply didn’t care what happened. I just wanted everything to end.  I could also feel my waters breaking, and I was lying in a pool of water.

Now the nurses took notice. They came running towards me, pulled me up, and walked me into the inner sanctum – the place where the actual delivery happened. The doctor also came, and was scolding the nurses for not having given me my enema correctly (now you see what I meant about the enema earlier). They strapped me up in a weird chair/bed contraption. I started pushing. By now, I was beyond every pain. I didn’t even care if I died. I.just.wanted.it.over.period.

Once on the bed thing, they started firing out instructions to push and breathe and so on. Half the time, I couldn’t even understand what they were saying, or rather I heard, but my brain didn’t register it. I still wonder why I was like that. My friends said that they were very aware of absolutely everything that was happening during the labour. Here I was, aware of nothing except the overwhelming pain engulfing me. I don’t even remember hearing the baby cry. After the baby was born, the pain had gone, but I was numb down there. The doctor and nurses were now pressing down on my stomach to get the placenta out, and I could feel a gooey mass coming out.  The doctor started stitching me up, as I had quite extensive tearing.

What came next is still too horrible for to contemplate. After the birth and the stitches, I was expecting to get to go back to my room and see my baby. But guess what? I was forced out of the chair, and made to walk all the way to the next room where they cleaned me out standing up. Why? Because there was another woman waiting for her turn to deliver. It was like a bloody assembly line process – hop up, deliver, hop down, off you go.

They gave me fresh clothes (supplied by my mother) and asked me to go take a bath. All this with fresh stitches all over my nether regions. I could hardly shuffle, much less walk!

I hated that hospital and all its people. Of course, I didn’t know then if this was the way labour rooms always worked, so unfeeling and harsh. But I’d had it with that particular hospital. The nurses inside were crude and uncaring – I suppose they need bribes to just do their jobs properly. Or maybe, they are just hardened seeing the same things every day. The doctor did her job and was off, but since the patient is stuck with nurses most of the time, they could have done better. Their labour room was the ultimate slap in the face. I wonder what they would have done if they had to deliver 2 women at the same time. I suppose one of the mothers would lose the baby while the hospital staff contemplated their next move.

I do know that I will never use this hospital if I ever have another child. I suppose I’d be forced to if it was my only option, but I hope it never comes to that.

What was your birth experience like? How do you feel you were treated by the hospital staff?

This is an original post to World Moms Blog from our writer and mother to one lovely and soundly sleeping son in Garden City India, Fire Crystals.

Photo credit to Daquella manera. It has a Flickr Creative Commons attribution license.