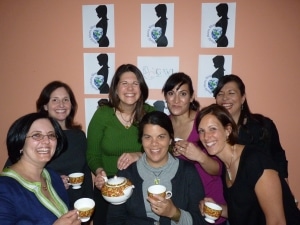 World Moms Blog contributors and friends at the inaugural “GAVI Global Tea Party” to raise awareness for life-saving vaccinations for children in the developing world.

In January of this year, my friend, Jen Burden, the founder of World Moms Blog, invited me to attend the very first grassroots advocacy party for the UN Foundation’s Shot@Life campaign at her house, here, in New Jersey. The theme of the party was “Around the World” and featured international food served in shot-sized glasses which we purchased for a $1-$3 donation.

Now, as a stay-at-home mom of two young boys, I jump at any opportunity for a fun night out with my friends! But I soon realized this night would be very special. How often do you know your actions are actually saving a child’s life?

Shot@Life seeks to “educate, connect and empower Americans to champion vaccines as one of the most cost-effective ways to save the lives of children in developing countries.” The money raised at this party went directly to purchasing vaccinations to immunize children against four deadly diseases: pneumonia, diarrhea, measles and polio. $20 is all that is needed to fully vaccinate one child, but sadly, 1 in 5 children around the world still lack access to these life-saving vaccinations.

Jen spoke that night about why she became a Shot@Life Champion. Her eloquent and touching speech had many of us in tears. We were also fortunate to have Caroline Barrett from the UN Foundation attend the party. She provided a wealth of information on Shot@Life and answered any questions we had.

Several attendees were interested in hosting their own Shot@Life parties, and I will be going to one of those parties this weekend. I belong to a mother’s club, and we also decided to host a Shot@life party as our spring fundraiser.

Jen Burden, founder of World Moms Blog, speaking about why she supports Shot@Life at the first ever Shot@Life grass-roots event!

The Shot@Life party really made an impact on many of us. We learned how to get involved to help save the lives of children in developing nations. That night, we raised enough money, over $740, to vaccinate 37 children. That’s 37 lives potentially saved!

A couple of months after the party, I received an e-mail from Jen with the subject line: “Want to be in a Global Documentary with me and World Moms Blog?” In the e-mail, Jen told us she was working with the GAVI Alliance (Global Alliance for Immunizations & Vaccinations) in Switzerland for the same movement, but this time the project was a global grass-roots advocacy effort and would be filmed.

The GAVI Alliance works tirelessly to provide vaccinations to children in developing nations. Other World Moms Blog contributors around the globe have also committed to providing footage for the piece through their own “GAVI Global Tea Parties.” A version of the documentary is planned to be finished in time for the Global Children’s Summit in Washington, DC this June.

I had learned much about the GAVI Alliance since the Shot@Life party, as the two organizations are partners in this movement. I learned that GAVI wants to make sure all children in developing nations receive vaccinations. They also work very closely with organizations like the World Health Organization and UNICEF to achieve this goal.

I also learned it can take an average of 10-15 years to get a vaccination that is readily available to children in developed countries to those in need in developing countries. GAVI is successfully working to narrow this time frame.

Jen let us know in advance what to expect at the party, including that it would be voluntarily filmed by NJ Discover TV Show.

I have to be honest and admit I was a bit apprehensive about attending this party. I had felt good about my participation in the Shot@Life party, but I wasn’t sure what I would have to say of importance at the GAVI Global Tea Party on film. But I wanted to help Jen, so I decided to give it a try.

We were filmed as we arrived. Then we sat down at the dining room table and poured tea. Jen provided an introduction about why this cause was so important to her (and yes, she made me cry again), then she told us we would be watching a couple of videos from the GAVI Alliance and have a discussion about each one.

The first video was from Sierra Leone, which has one of the highest infant mortality death rates in the world. In the video, mothers were talking about their children dying from diarrhea and pneumonia. I’ll never forget one of the mothers saying she brought her child in because he had a fever.

She was told her child had pneumonia and then she said: “…and then he died.” All I could think was: how could a child die from pneumonia or diarrhea?

My neighbor’s son developed pneumonia when he was 3 months old, and he was fine.  And when my son received the rotavirus vaccination, I remember my doctor telling me how wonderful the vaccination was because it had reduced the number of hospitalizations due to dehydration. But I never thought about a child actually dying from diarrhea. In the US, it is virtually unheard of.

But nearly every child in the world will suffer a rotavirus infection by their third birthday. While rotavirus infects children in every country, more than 95% of rotavirus deaths occur in low-income countries in Africa and Asia, where access to treatment for severe rotavirus-related diarrhea is limited or unavailable. (Lancet Infectious Diseases Early Online Publication, 25 October 2011 “Global Mortality Associated with Rotavirus Disease among Children in 2008: Findings Based on a Systematic Review and Meta-Analysis.”)

The second video was from Nicaragua and featured a mother who had lost a child from pneumonia.  Now pregnant again, she was hopeful because the vaccine for pneumonia had made its way now to her country.

According to the GAVI Alliance, pneumococcal disease is the leading vaccine-preventable cause of death in children under five.  WHO estimates that more than 500,000 young children die each year from pneumococcal infection, with the vast majority of these deaths occurring in developing countries.

Each of us at the table took turns discussing the importance of vaccinations, and how we could help. We later talked about how we all had much more to add to the discussion than we thought we would going into it by reacting and relating what we saw to our own life experiences.

And it was easy for us to see the impact just receiving vaccinations would have on children’s lives through the videos.

The GAVI Alliance estimates that potentially one million children’s lives could be saved every year if they received the pneumonia and rotavirus vaccines. By supporting Shot@Life and the GAVI Alliance we can help get the funding for vaccinations to the children who need them most. We could be advocates and spread the message. We could help give children a shot at laughing, playing, jumping, reading and most importantly, life.

Has World Moms Blog advocacy for life-saving vaccinations had an effect on you? And what would you like to give a child a shot at?

This is a guest post by Amy Pohl of New Jersey, USA for World Immunization Week.  Amy has been reading World Moms Blog since it’s inception, and we are thrilled to have her as a guest here today.  She can also be found blogging at Jersey Moms Blog as Elizabeth’s Boys.