HUMAN RIGHTS: A Voice for Children in Vietnam 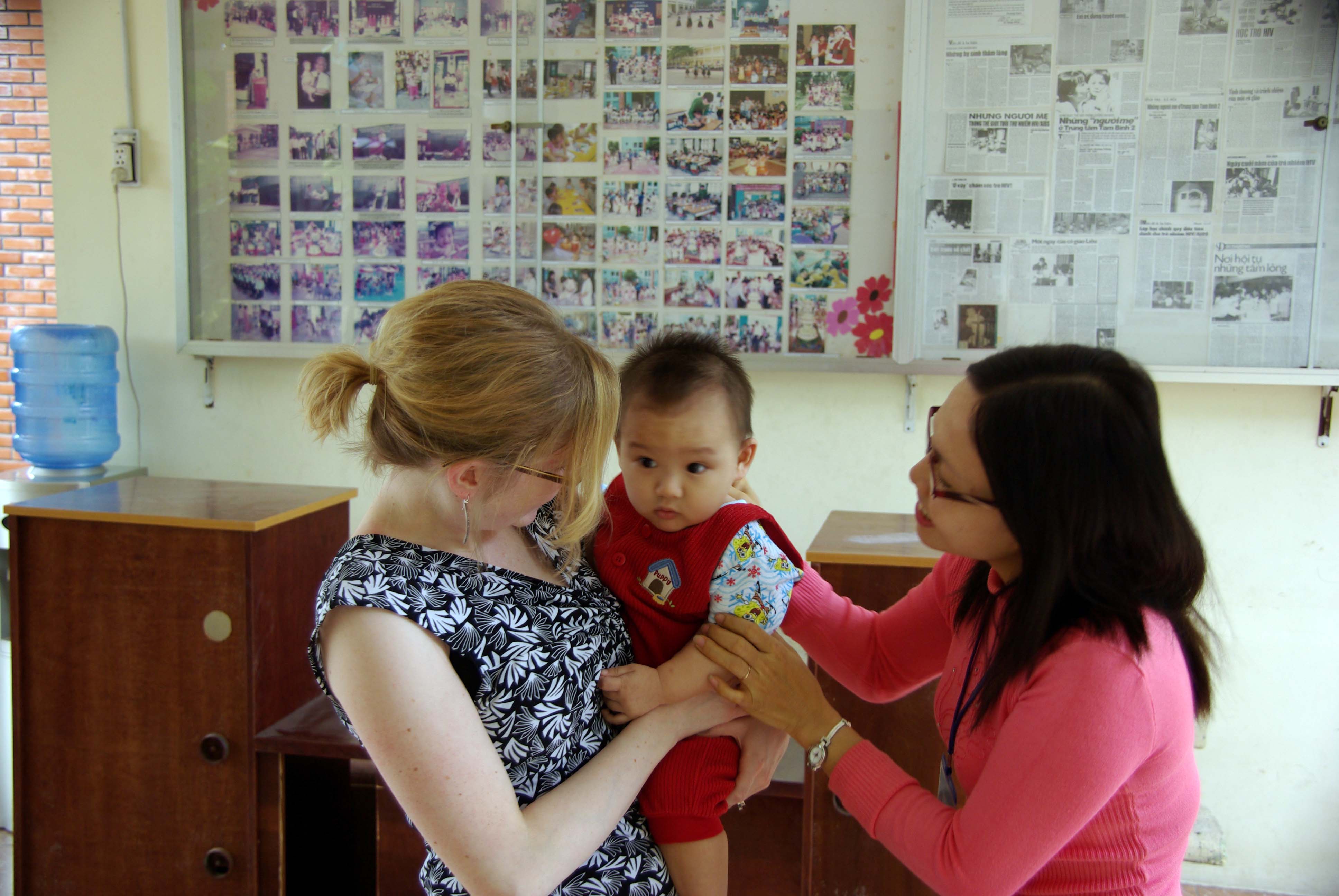 Photo of writer holding and meeting her son for the first time in the orphanage in Saigon, Vietnam.

On a hot, steamy day in August of 2008, my husband and I stepped off of an airplane in Saigon, Vietnam.   Mere moments after touching down in this faraway land, we found ourselves standing outside of an orphanage in the sweltering summer heat, waiting to meet someone we had only seen in pictures.

And that’s when it happened; my life changed in two very important ways. An eleven-month old child was placed into my arms, and in an instant I was simultaneously transformed into a first-time mother as well as an advocate for the voiceless children of the world.

Looking back, it is hard to believe that such a profound change in how I defined myself could have happened in a single, solitary moment.  Months later I would realize how that one moment would end up overthrowing and redirecting the entire trajectory of my life.

After returning home, I started thinking about all the children we had seen in Vietnam, especially the ones residing in the orphanage. Once you see their faces, you cannot forget them.  Those of us in the international adoption community know this truth all too well: life in an orphanage is hard, and it can be devastating physically, emotionally and mentally.

As I witnessed my son struggle through his own post-institutional trauma, it seemed that I carried the images of his orphanage mates with me constantly.  I would stare at my son and be overtaken with a sense of responsibility to help take care of those we left behind. I had no idea where to start. I began researching about the plight of children, families and orphans in Vietnam.We had fallen in love with not only the people of Vietnam, but the culture and breathtaking landscape of the countryside.  We felt that we had been given a rare chance to have a second home half way across the world, even if we were only outsiders looking in.  We wanted to do something to give back to the country that had given us so much. UNICEF estimates that there are 1.5 million orphans in Vietnam.  About 23,000 of these children are classified as “street children” with an estimated 20% being HIV positive.  Once children age-out of an institution, the outlook is grim.  It is estimated that most end up on the streets and fall victim to sex trafficking, drugs and a life of crime. Placing children for adoption, within Vietnam and abroad, remains difficult due to many factors.  In fact, adoptions between the US and Vietnam are currently halted while Vietnam focuses on strengthening the integrity of its adoption law to ensure corruption and trafficking can be prevented. To add to all of this, the effects of war can still be felt even today among some children of Vietnam.

Decades later, children are being born with severe birth defects due to the Agent Orange that persists in the soil and water in several areas of the country.  The Red Cross estimates that 150,000 children have been affected. Many of these children are growing up in orphanages without much hope of a future.

So in 2009, I decided that I could stay inactive no longer.  I partnered with two other adoptive mothers, and we started a campaign to bring awareness and fundraising efforts to organizations serving the children of Vietnam.  We were able to raise funds for life-saving surgeries, mobile medical clinics and orphanage aid. Through that experience I was able to come in contact with many wonderful organizations doing amazing work in Vietnam.  I encourage you to visit these sites and become inspired by their efforts and accomplishments:

Obviously a piece of my heart resides in Vietnam, and my desire to help the children of this country stems from the adoption of my son. However, there are places all over the world in which children without a voice are in need of aid. As staggering as the statistics for Vietnam may seem, the orphan crisis is a global problem.

As a mother, I feel that I can’t rest until I do my best to help those who do not have the safety of a family on which to rely.  All children—in my country, in Vietnam and in all nations—deserve access not only to basic necessities but to the gift of love and the feeling that their life matters.

What are some ways that your children have inspired you to reach out to others in need?

This is an original post to the World Moms Blog Human Rights column by Lauren from Tennessee, USA. Lauren is a lover of nature and a mother to two boys adopted from across the globe.  She blogs about her adventures in adoption, autism and the great outdoors at http://hikebloglove.com.