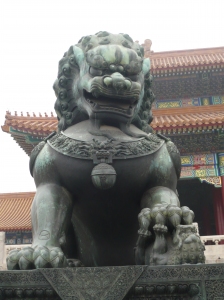 Imagine living in a place where your reproductive life was controlled by the government.  A place that not only controlled the number of children you were allowed to have but also the timeframe.  A place that enforced stiff fines, allowed forced sterilization and even forced abortions when you were breaking the law.

Imagine living in remote, impoverished parts of rural China.  This is what life is like for most women in these far off, often forgotten parts of the world, a place that accounts for millions of China’s 1.3 billion people.

China’s controversial one-child policy was implemented by the Communist regime in 1978 as a way to control China’s soaring population and help alleviate some of the related negative social, economic and environmental consequences.  Born at a time before China’s dramatic ascent as the world’s number two economy, the one-child policy was enforced as a way to keep China’s exploding population at bay.

Photo above of the female lion which is always located on the west side of a building while the male lion, which is considered more important in ancient times, is located on the east side, towards the rising sun.

Although the policy has shifted slightly over the years, the main legislation intact today restricts married, urban couples to having only one child while allowing some exceptions for rural couples, ethnic minorities or parents without any siblings themselves.

The policy has had significant effects and over the years has decreased fertility to such low levels that it’s almost had a reverse, negative effect on China as whole.  Chinese authorities claim that the policy has been a success by preventing around 400 million births since its inception.  However, demographers and human rights activists beg to differ as they believe the the policy has succeeded in bringing down the birth rate too sharp and too fast and has systematically abused the rights of the Chinese people, namely women and girls.

Recent accounts of the male versus female gender ratio reveals an abnormally high ratio of Chinese males per females.

Per a recent article in the New York Times titled “The Plight of China’s Favored Sons” demographers believe that “nationally, China’s sex ratio at birth is 120 boys per girls; in rural areas, where couples often have more than one child, the sex ratio at birth for second children rises to 145.  By comparison, the U.S. sex ratio at birth is 105 boys per 100 girls.  The main reason for this gap is the use of ultrasound scanners to determine the gender of fetuses, followed by the abortion of many female ones”.

There is also a significant concern that China’s one-child policy will lead to not enough young people to care for their elderly parents, a common, traditional obligation in China.  For who will be available to take care of China’s graying population when there is only one child per family?  Finally, there are huge concerns that the imbalance in males versus females could lead to as many as 40 million or more Chinese men without a wife.  That could have huge negative implications on society as a whole.

What have been the implications of this policy for women and girls?  The human rights abuses against the mothers-to-be and the unborn female children who are either aborted or left in the hands of a poor peasant farmer who prayed for a son to help out on the farm, is believed to have led to increased levels of female infanticide and magical “disappearance” of girl babies.

Sadly, sex discrimination is extremely prevalent in rural China where the boy is still the prized possession of the family.  This is especially true in the countryside where boys are required to work hard and help out at the farm.  Fortunately, peasants are able to have a second child free of charge in the event that the first child is a girl.  However, if the second one is girl, either they are out of luck or sometimes they abort it.

Making matters worse, many rural officials are paid a reward in relationship to their compliance and achievement of the birth rate quota in their villages.  Thus sadly to say, mass forced sterilization or late-term abortions of a second-child fetus occur and sometimes in a large extent.  Although illegal, the central government has little or no control over this tragic truth that is all too common in remote villages in China.

Per Amnesty International, children born outside the quota have limited rights and are not issued “hukou” documents which provide access to health care, education or other social services.  The parents also suffer for having the forbidden second child and often face harsh penalties and fines up to four or five times their annual salary.

As the largest population in the world, in which one in five people on this planet is Chinese, what should China do?  What is the ethical choice?