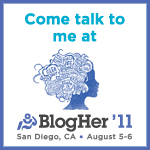 This coming week, I’m excited to be representing World Moms Blog at the Blogher ’11 conference in San Diego, California.  As I’m busy preparing for the adventure, this week I’m going to keep it short, but hopefully, slightly entertaining.

The writers’ interviews that we’ve been posting as additional posts on Tuesdays and Thursdays have been really helping us get to know our new writing community better. We’re even finding many more things out about our seasoned WMB writers that we didn’t know!

It occurred to me that some of you might be thinking, “Who the heck is running this ship?” And, also, maybe the thought never even crossed your mind. ha ha. So, anyway, this week, as your World Moms Blog founder and editor, I’m answering one question from our normal interview.  And, here’s how it goes… END_OF_DOCUMENT_TOKEN_TO_BE_REPLACED