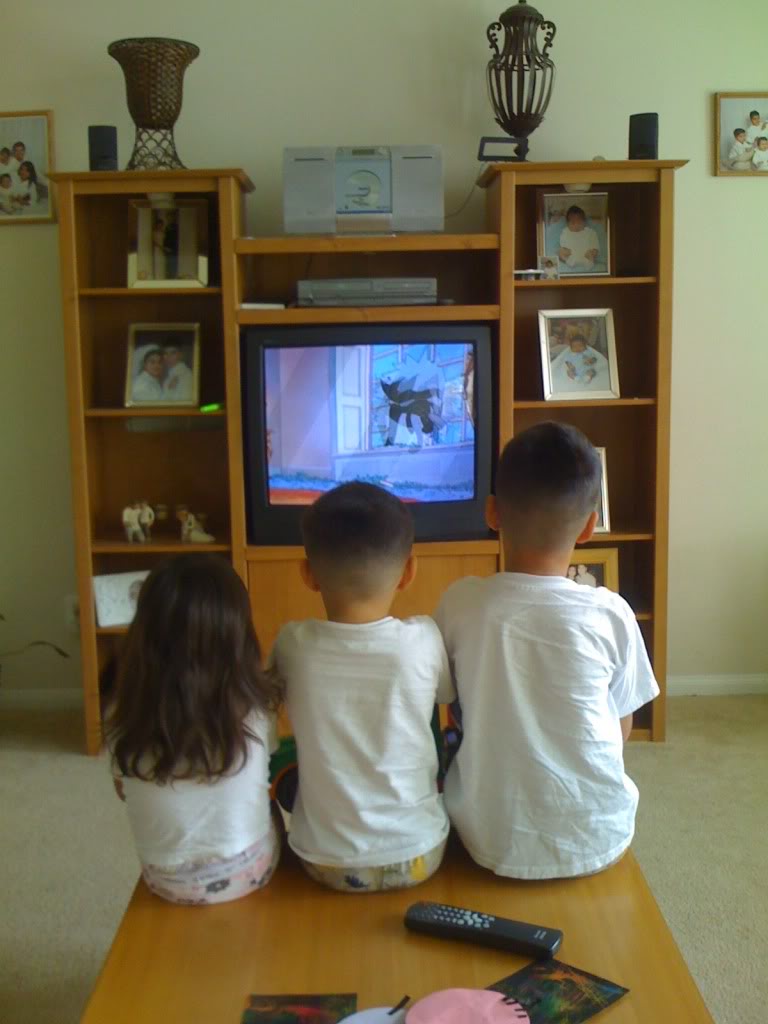 They say that the first step to recovery is admitting you have a problem.  Well here’s my confession:  my children watch WAY too much television.  I admit it.  It’s bad.  It’s embarrassing.  But it’s the truth.

When my daughter was born, I was given those Baby Einstein videos.  You know, the ones that make you believe that you’re doing a GOOD thing by putting your infant in front of a television that was showing random images while playing classical music in the background.  Disney claimed that these videos were educational, and I fell for it.  Plus, it seemed to calm my baby down, so I thought I was killing two birds with one stone.  Needless to say, my daughter was introduced to the wonders of televised media very early on.

She was nine-months-old when I returned to work.  I didn’t want to put her in daycare because I was afraid that she would be sick all of the time.  I was also worried about how she would be treated by the staff, and I wondered if all of her needs would be met.  She was too young to tell me how her day went, and I was too paranoid to not obsess over it, so daycare wasn’t an option for us.

When my mother agreed to be her caretaker, I felt like the luckiest person in the world.  There was nobody I could trust better to take care of my child (even my husband was a close second.)  I knew that with my mother, my daughter would always be supervised.  She would have the healthiest meals.  And she would be held and loved as though I was with her.  This made my transition back to work much easier.

Going back to work was a lot harder than I had anticipated.  I decided that I would not have another child until my husband and I were financially able to live on one salary so I could stay at home to raise the kids.  When that time came, I swore I would not allow my second child to watch any television and he didn’t.  Seven months after he was born, Disney recalled those Baby Einstein videos.  Interest groups pressured the company to offer parents a refund on the premise that time in front of a TV screen was bad for babies.  I knew those videos were a bad idea!

I stuck to my guns and never put the television on for my son.  However, shortly after his first birthday he started showing an interest in what his sister was watching.  Damn it!  She was now four-years-old, going to school for three hours a day, and watching a lot less television but it was still on.  It was frustrating to see my son looking at that screen, but I didn’t think it would be that big of a deal for him to watch a little television from time to time, as long as it didn’t become a problem.

This brings me to today.  It has become a problem.  I use the television to keep my son occupied while I cook or leave the room to do some other task (like use the bathroom.)  He is 22-months-old and cannot be left alone for a minute without putting himself in a dangerous predicament.  I have discovered that if I put the TV on, he will sit quietly and watch, without trying to destroy the home or himself.  I know this is bad.  I know it’s not the right thing to do.  But I don’t think I have any other choice.

I am hoping that my son’s television time will diminish once I can trust that horrible things won’t happen when I leave the room.  My daughter’s television watching is down to about two to three hours a day.  This is actually quite an improvement, so don’t judge me!  She watches a little in the morning while she’s getting ready for school.  She watches again after school, and a little more TV before bed.

I know I am the one who determines how much television my children watch.  I know that I’m in control.  But I don’t know if I’m ready to let the television go just yet.  I must admit,  I like the freedom that TV affords me to do what I need to get done in the house without having to worry about the safety of my children.

Now that my dirty little secret is out in the open, where do I go from here?

This is an original post for World Moms Blog by Kally Mocho, our Basque Heritage Queen, of New Jersey, USA.

Photo credit to http://i730.photobucket.com/albums/ww306/carmelitaforero/IMG_0047.jpg.  This photo has been used within the terms of photobucket.