Imagine that it is your child’s first day of preschool. You are nervous, naturally, about them adapting and being able to spend time away from you. They are not sure what to expect and may be dealing with a
range of emotions from excitement to apprehension and fear. It is a big step – for both of you. 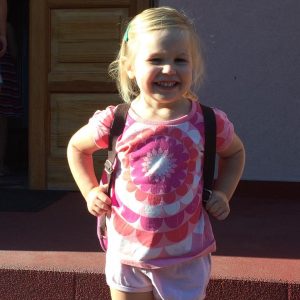 First day of pre-school in Poland

Now take that first day and move it to a different country. The school operates in a different language, which neither of you speak, and you and your child do not know anyone. You have only just arrived in this country a week ago and now you are saying goodbye to your child for a few hours, hoping that they will somehow understand what is going on and perhaps make a few friends despite the language and cultural barriers that lie before them. One thing is for sure – you don’t know what is going on.

This was our family in September. Being a US Foreign Service family that moves every two or three years, the expat life is not new to us, but sending our three-year old to a local Polish school was. The result? We are more connected to the local community in Poland than we have been in the previous six countries where we lived over the past 13 years.

As an expat, it is easy to arrive somewhere new and settle into a community of other expats. When you move far from home, you seek comfort and familiarity; both of which can be found with other expats who are in the same boat and who may share the same language, customs, traditions, and beliefs that you do. We’re guilty of it: we’ve done it in Thailand, Sudan, Venezuela, Australia, and Mozambique. It’s certainly not a bad thing. In fact, sometimes that familiarity is what keeps you sane. But, other times, being so ensconced in an expat community can unintentionally keep you from making local friends and appreciating the culture and traditions around you.

What have we gained from putting our daughter in a local preschool? 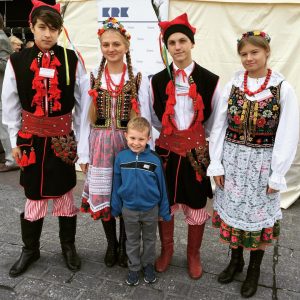 Visiting a local festival in Krakow

First and foremost, she is happy and has made a great group of friends. Her teachers are enthusiastic, loving, and kind. Additional bonuses? She understands and speaks Polish. The whole family has learned about Polish traditions, customs, and holidays as she celebrates them in school. It has allowed us to make a number Polish friends, further educating us about Polish lifestyle and culture. It has been humbling – for me, in particular. Each time I pick her up, drop her off, and attend school functions, I am embarrassed by my inability to speak Polish, but I have been overwhelmed by the warmth of those parents who speak English and go out of their way to befriend us. And from those friendships come great advice on where else to travel in Poland, what to see and what to do, what events to attend, and how to honor and celebrate Polish holidays.

The choice we made, albeit out of cost and convenience considerations at first, has helped us to dig deeper than the typical expat life we generally adopt when overseas. In turn, it makes the limited time we have in Poland richer and more meaningful.

Sometimes the decisions that scare you the most reap you the biggest rewards. In the beginning I asked myself if we were doing the right thing by sending our 3-year old to a school where neither she, nor I, could understand what was going on. Eight months later, we know we made the right choice.

Loren Braunohler is a former U.S. diplomat turned stay-at-home mom and freelance writer. She is a world traveler who avoids the cold (don't ask why she is currently in Poland). Former assignments have included Mozambique, Venezuela, Australia, Sudan, Thailand and Washington, D.C. She enjoys running, although she probably enjoys sleeping even more. Loren blogs about her family's international adventures and parenting at www.toddlejoy.com.