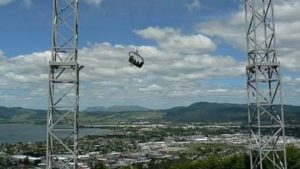 The Skyswing over Rotorua, New Zealand

It’s one of those truths that have become a cliché: having children challenges and changes you. I’ve changed in many ways thanks to the boys pushing emotional buttons and exhausting me to the point of  raw survival. I’ve faced many a demon I didn’t know was lurking in my psyche. Those I expected, although the extent of it all still surprises me. This new place is a bit of a shock.

My latest evolutionary leap is to become brave around physical challenges.

I was the girl who would read rather than just about anything. I played with cut-dolls and made up plays and dances, I built indoor huts and had umpteen projects on the go.  I did swim, climb a little, build dams and ride horses but I never really pushed my limits, not really. I kept myself safe. I was an expert at that.  And then I had three sons who like to do stuff.

Suddenly, I’m in largish surf being a support Mum at a beach camp. I’m swinging on some revolting swing above a hill slope in which you have to be strapped with a harness and you look down directly at the ground from swear-inducing heights. I luge. I hike through bush where there are no other people and try not to think about abductions and falls while we’re out of cell-phone range. I’m jumping off river banks and wharfs from three or four metres up.

And I’m still scared witless. At least in the beginning.

Then I do the thing and repeating it is O.K. Sometimes multiple repeats of challenges are asked of me. Sometimes I allow myself to be convinced. Those boys have a way of parroting me back to me.

“Don’t psyche yourself out.”

And the really annoying one that I say all the time : “You feel brave after doing the scary thing.”

And so I have luged when I would rather have sat and had coffee. I’ve been in the surf when wine in a pretty dress was more my style. I swung on that horrendous swing. I jump off the river bank and the wharf. And you know what, they’re right. I feels good to be brave. And it really does happen after you do the scary thing. I expect they’ll continue to encourage me to do the stuff I don’t want to do and that’s pretty awesome because I’m an old mum and my kids want to do stuff with me. Then they’ll leave me and I suspect those will be some of my favourite memories around parenting.

Have you done anything physically brave thanks to the encouragement of your children? Tell us about it.

This is an original post to World Moms Blog by Karyn Wills of New Zealand. Photo credit: www.loveoftheroad.wordpress.com (The Skyswing over Rotorua, New Zealand)