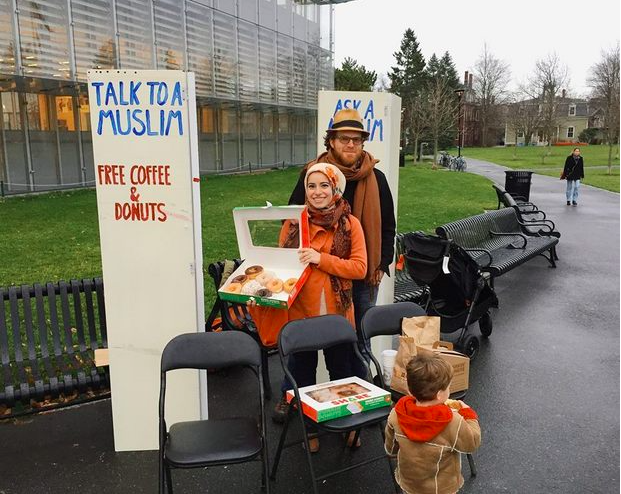 In the age of cellphones and social media, it’s very easy to disconnect from people without realizing you’re doing so. How many of us create walls subconsciously, especially if it concerns people of different nationalities we don’t usually associate with?

I was struck by a story of a woman who decided to set up a stand outside of a library in Cambridge, MA. Inspired by a story her husband saw on NPR titled “Ask an Iraqi”, Mona Haydar thought that it was important for her to establish a connection with those who may not know what’s it’s like to be a Muslim, especially a Muslim woman living in the United States.

For Haydar, setting up a stand titled “Talk To A Muslim” was a way for her to dispel any preconceived notions or stereotypes so many have of foreigners, especially of Muslim women.

With so many crises affecting different nationalities, in light of events happening in Syria, Haydar’s goal of creating a physical stand and waiting for people to approach her was a bold move since she had no clue how it would be received. What was surprising and hopeful was that people did stop by and spoke with Haydar, and that was a start. She was quite surprised to see how people did respond to her stand and while the reception was initially uncertain, it was enough for her to think about setting up the stand again.

In the current climate regarding people of cultures we aren’t familiar with, not willing to find out about them says more about us than them. There shouldn’t be a division of “them” and “us”, but unfortunately, there is.

How many times have we been guilty of giving in to fear of the unknown instead of taking a step back and dispelling the stereotypes we have learned about other cultures?

As someone who has had to answer questions about my nationality or religion over the years, the initial offense I felt has made me rethink of how people perceive me. Over the years, I have been mistakenly identified as either Korean or Japanese, rarely a Filipina. In addition, since I’m married to a Jewish man, I have been asked whether I’m a convert or adopted due to my Jewish maiden name, and to which I answer “no” to both. Answering these questions over the years, my frustration over being categorized primarily due to my physical appearance has made me realize that it’s not because of ignorance, but lack of communication. Asking questions and conversing about each other’s cultures would go a long way than being presumptuous about other people’s lives.

After reading about Haydar and seeing the NPR segment titled “Ask An Iraqi”, it made me wonder if we should put ourselves in Haydar’s shoes. Should we have to set up a stand in order to be understood or be compassionate towards others? Have we become so desensitized by our own prejudices that we have no room for being tolerant? I would hope not. Haydar’s stand may just be one form of starting conversations regarding one’s culture, but I think it’s an idea worth exploring. We might just realize that we may not look alike, but we all share the same intrinsic values of goodness towards humanity.

How do you think we can nurture better cross-cultural understanding?

« CANADA: Parenting In The Social Media Age
INDONESIA: Life Without The Privilege Of Domestic Help »