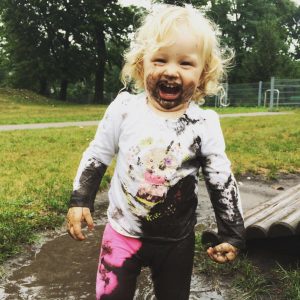 Eight thousand pounds, ten suitcases, three car seats, and a mammoth-sized double stroller. That is how we move from place to place. Our lives measured in mass. The “things” we take with us as we circumnavigate the globe.

Every time we pack up and unpack I ask myself, do we really need all of this stuff? All of these things? What would become of us if we couldn’t bring these things with us?

Before I became a parent, I wasn’t so concerned about having our things. It was always nice to receive our personal items and make our new house a home, but we could do without. While on assignment in Sudan, our household shipment took a year to arrive and be released at the port, at which point we only had one more year of our assignment left. Surprisingly, we found it pretty easy to live without our things.

But then I became a parent, and we acquired all of the things that come along with that wonderful privilege – toys, blankets, cribs, clothes, plastic plates, bottles, kid-proof cutlery, safety gates, bikes, trikes, scooters, hot wheels tracks, mountains of Legos. All of the things that entertain kids and make them happy (so we think). Times three.

With three young children and all of this stuff, it then came time to move — not once, but twice (internationally) in one year. The first was a move from Thailand to Washington, D.C.; the second from Washington, D.C. to Poland. And with each move came new regulations about how much of our stuff we could take with us and how long it would take us to receive it. And naturally, as parents do, I worried about how the kids would fare without their things. How will they keep themselves entertained? Won’t they be bored? Won’t they miss their stuff?

And then the test came. In Washington, D.C. we were allowed 1/12th of our unruly-sized load of things. This actually turned out to be a very good thing. We got out to explore often – every day – and many days, multiple times. We lived near trails of every kind, streams, baseball and soccer fields. There must have been ten playgrounds within a mile radius. Libraries, museums, nature centers. Most within walking distance. By getting out, it became increasingly clear that the kids didn’t need their “things,” that in fact, those things become pretty unimportant when there were was so much exploring to do.

Their happiness was not predicated on whether or not they had their stuff. They were just as happy as before; if not, more so at the excitement of discovering new places. 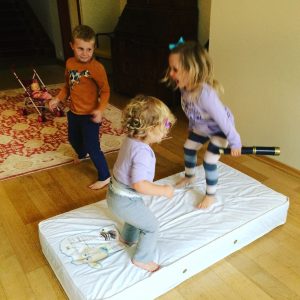 After a wonderful year in Washington, we moved to Krakow, Poland last month. Our things arrived in several different shipments over the course of six weeks. It was amazing to watch the kids use what little they had at the beginning to easily amuse themselves. Crib mattresses became trampolines, our back yard became a place of adventures, plastic tubs became swimming pools, and moving boxes . . . you name it, and moving boxes turned into all kinds of things from forts to art tables and clever hiding places. And just as we did in D.C., we are exploring. We are exploring our neighborhood, the main square downtown, the forest, the zoo, castles with dragon caves (yes, you read that right), biking trails, outdoor fountains, ice cream parlors, chocolate shops. 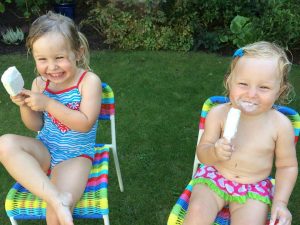 On Friday, the last shipment of our 8,000 pounds arrived. As I look around, I realize how easy it would be to simply. To cut down the clutter. To purge all of the things we don’t need and choose to get out and explore as an everyday way of life. Kids are the best versions of themselves when they use their imaginations. Less really is more. Happiness is not about what they have, but about who they are with. So what does that mean for us? It means we will slowly be letting go of our “things” over the next three years and lightening our load before we embark on our next overseas adventure. And I’m sure the movers will thank us for it.

Have you ever felt the need to cut down on all of the “things” you own?  Have you thought about how you might do this (i.e. – by donating to local orphanages, Goodwill, etc.)?

This is an original post to World Moms Blog by Loren Braunohler.  Loren Braunohler is a former U.S. diplomat turned stay-at-home mom and freelance writer.  She is a world traveler who avoids the cold (don’t ask why she is currently in Poland).  Former assignments have included Mozambique, Venezuela, Australia, Sudan, Thailand and Washington, D.C.  She enjoys running, although she probably enjoys sleep more.  Loren blogs about her family’s international adventures and parenting at  www.toddlejoy.com.

Loren Braunohler is a former U.S. diplomat turned stay-at-home mom and freelance writer. She is a world traveler who avoids the cold (don't ask why she is currently in Poland). Former assignments have included Mozambique, Venezuela, Australia, Sudan, Thailand and Washington, D.C. She enjoys running, although she probably enjoys sleeping even more. Loren blogs about her family's international adventures and parenting at www.toddlejoy.com.

« ONTARIO, CANADA: Forty and Freaking Out
WORLD VOICE: Are These on Your To-Do List? #GlobalGoals »