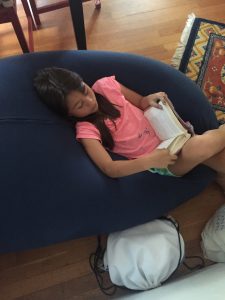 Last week I took my daughter to a local book store to spend a gift card she received for her birthday. My daughter loves books and had a hard time deciding what she wanted most, to purchase the final books in one of her existing collections or get something totally new.

While I was in a different section, my daughter engaged the children’s department manager in a book discussion. Evidently sharing with the woman all of her latest good-reads, which included much of the Percy Jackson series by Rick Riordan, all of the Harry Potters, and several non-fictions like I Am Malala and A Long Walk to Water.

When I arrived back on the scene, the woman commended me for raising such a voracious reader and said she was amazed that my daughter went to public school, being convinced that only private schools could produce such a 3rd grade equivalent.

I didn’t know if I should be flattered or offended.

The woman, who was in her late 50’s, was a retired educator herself and clearly had a deep passion for books and strong opinions about appropriate reading levels. She impressed upon me that many of my daughter’s book choices were advanced for her age and encouraged me to consider steering her away from further indulgences.

This sentiment concerned me because, until recently, I had kept close tabs on what my children were reading and most of the advanced books were ones we read together. But lately, my daughter had been zooming ahead of me, finding pockets of reading time at school and also before lights out at night.

Admitedly, I hadn’t read any of the Percy Jackson books. Knowing that the books had been made in to PG-13 movies did have me somewhat concerned about content but was I really hearing this book specialist right? Was she really trying to stymie my child’s enthusiasm for reading by directing her choices?

The woman was trying to point out that my daughter is only a third grader once and there were plenty of sweet, age-appropriate books out there for her to indulge in. Didn’t I want to save these 6th, 7th and 8th grade books for later?

I really had to think about this.

After all aren’t I always trying to slow my daughter’s maturity? Aren’t I the same mother that won’t let her watch teen television shows because they’re too sassy and full of content ahead of her age? Could  books be presenting the same issue?

I’ve grappled with this for the better part of 7 days now. What are the demigods in Percy Jackson doing up there at Camp Half Blood? Aside from the reality of Malala Yousafzai getting shot point blank by the Taliban, what fictional characters might be playing out scandalous scenes in my daughter’s young mind from The Secret Benedict Society?

Does it make me a less engaged parent if I don’t keep my finger on the pulse of my childrens’ literary lives? Do I need to give up my own sacred reading time to be sure I’m on topic with my kids?

A writer friend of mine told me once that the difference between books and movies was that movies spoon feed us all of the images and visuals in a story whereas books let our imaginations fill in the scenery.

When kids read books with ideas or content beyond their experience levels, their minds fill in the pictures age appropriately.

I saw this first hand when My daughter read Harry Potter and the Sorcerer’s Stone in first grade without having bad dreams but when she saw the movie in second grade, she had nightmares about the final images of Voldemort for months.

I love my daughter passion for reading and I’m proud of her advanced and eclectic book selections but now there’s a little nagging voice whispering in my ear every time she picks up a new and unfamiliar novel.

And in the end, instead of helping us find a few new, good books, I think the well-intentioned saleswoman may have done more harm than good.

Where do you stand with letting your children read ahead of their age level? Do you think this saleswoman had a point?

This is an original post for World Moms Blog from our senior editor and mom to two, Kyla P’an.