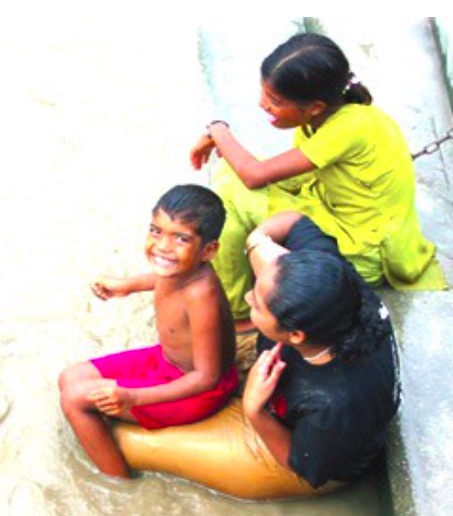 This is Angi, in the Ganges river on the first day we met in India. She is the reason I decided to start a school (for her and children like her), for Angi and her friends.

She was my first Indian child-friend, she was seven or eight years old. Angi did not know her birthday or how old she was exactly. I figured she was around the same age of my own twins who were: “seven and a half” as they would proudly say to anyone who would ask. 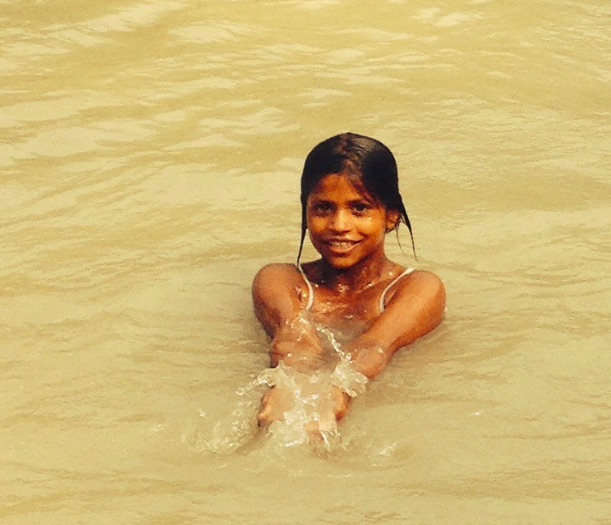 I took pictures of her happy face as we were giving her attention and joined in her water play. My “ignorant self “ thought she was a boy (short hair, no full bathing suit, no jewelry) but my friend “Helen” told me that she was a girl and that we were in fact bathing in the women ghat! ( a place exclusively for women to take a bath). Had I missed a sign ?

We played “patty cake”, threw mud, bonded, laughed and swam in the Ganges together. She showed me how to get blessings from Ma Ganga. Afterwards she let us know that she was hungry as she pulled us towards the ice cream cart.

I met her every day until it was time for me to return home.

I was to go back and help her and so I returned the following summer.

I never found her when I went back, but I found many of her little friends who told me that Angi had moved to the city….

The band of children who would hang out around the walk bridge looking to make some money was still there. A little girl (Arti) was selling flowers just like the way I had seen her do the summer before. In exactly the same spot and even the brown cow seemed to have turned into a “statue –like” creature. I wondered:” Had one evening flowed into one year?” 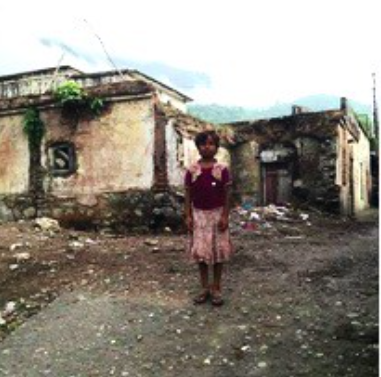 Vikas was still selling recycled shopping bags. Raj was still selling newspapers. Arti (my flower girl) became my second dear friend. It was with much delight that my own children a year later would become friends with her. Even though it was a hard lesson for my daughter to see that trading footwear (similar to trading rainbow loom bracelets in the USA) turned into:“ I love your shiny Target sandals for ever and ever…”

I called them lovingly: “The children of the Ganges” because Ma Ganga was there lifeline/home. They called me: “Didi” (sister).

The year after meeting them I bought art supplies and most evenings (if the rain was not pouring down) we met at the steps of the Ganga, the children gathered and made drawings that I later turned into cards upon my return to NY. 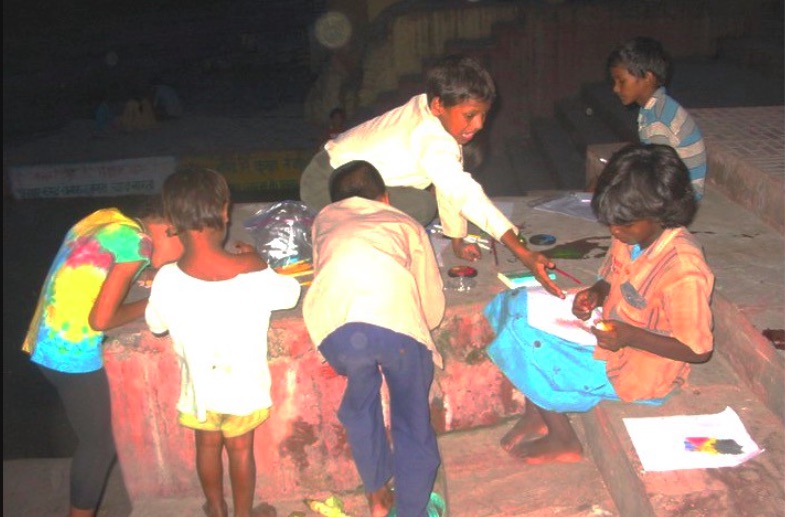 Many people have opened their hearts along the way and given time, talent, gifts, and money for “The Children of the Ganges”.

UNIS PTA bought many cards, UNIS parents and students have given and raised money, Emily held a success full penny drive at her school in NJ, many old UNIS library books made it to India, along with old UNIS laptops and school supplies.

Many blessings have returned to me.

So I continue to return every summer holiday and give my time and my best so they may have a chance to reach their potential. My hopes are that at least this handful of children will not turn into child brides or child laborers. 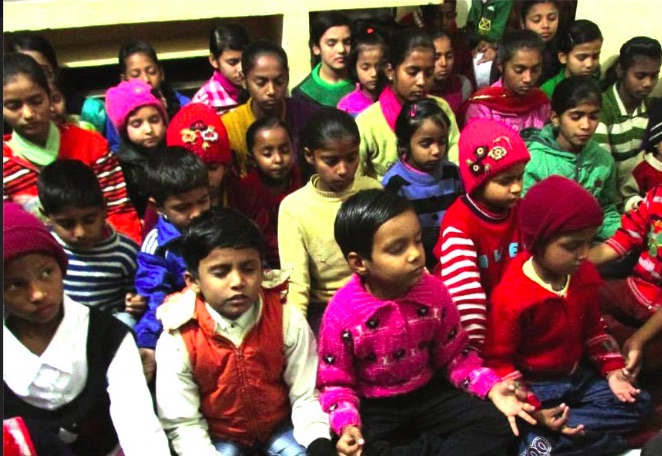 Singing ,Traditional Indian dancing, art, yoga, English, photography, and computers are among the offerings to the Children of the Ganges. It is a safe place to come to because: ” our teachers’ hands are for helping instead of hitting”

For more info about our: “ no hitting school “ go to: www.childrenoftheganges.com

I am forever grateful for the many friends and strangers who care and support us. 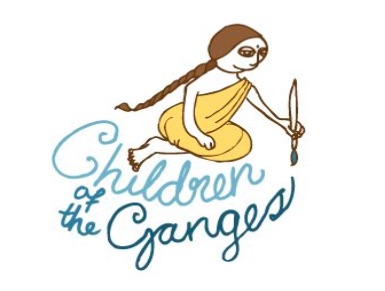