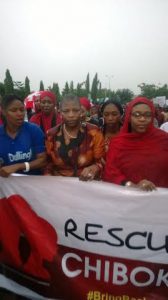 The first thing I noticed was her walk.  In 2010, at Lagos International Airport, she walked purposefully, like one who has limited time to solve the world’s problems. It was nice seeing a woman walking with such force, even if it was just through the airport. I have been accused of walking like a man, and it was refreshing seeing another woman with that stride. Then, I realised it was the former Minister of Education–the one with the signature short haircut.

I didn’t know her name. I couldn’t be bothered about politics; my focus was surviving in a nation where one has to fight extra hard for the basics of life. As far as I was concerned, politicians were all the same: enemies of the common person struggling to make a living.

Even so, I heard of her once in a while. She was said to be tough on government corruption, especially those who used government funds as their own.

On April 30, 2014, I saw her again at the first march for #ChibokGirls. At the time, they has been missing for just 15 days. (They have now been missing for 379 days.) She was something else! She spoke with such passion. I knew I would never forget her name: Obiageli (Oby) Kathryn Ezekwesili. Everyone called her Auntie Oby.

The sky threatened rain, and as the clouds grew darker and more threatening, even I thought it would be the end of the march. Little did I know!  Auntie Oby rallied the crowd:

“Are we salt? Would we melt if beaten by the rains? Do we know the condition our #ChibokGirls are in?”

And that was it. We went. The sky did open its floodgates, and we got drenched. I have never been so soaked, but we kept marching and chanting, “All we are saying is #bringbackourgirls.” Women forgot about their hair, and their appearance, and marched. I bet you that if Aunty Oby had asked us to, we would have marched to Sambisa Forest on that day and brought our #ChibokGirls back. At the end of that day, I told her I wanted to hug her. She opened her arms, and I held her tight. “Thank you for making me believe in Nigeria,” I said.

For me, Auntie Oby represents sacrifice and giving. She is the heart of the #BringBackOurGirls movement and considers the #ChibokGirls her daughters, refusing to let the world forget them.

She gives so much of herself that I am afraid that she will break. I sometimes wonder where she gets her strength from.

Auntie Oby has been a mother, mentor, teacher, and a beacon of hope to so many young people in Nigeria, a nation that desperately needs such role models. Her lessons keep us on task: to always deal with empirical evidence, to focus on the issue at hand and to not allow other issues drown the cries our #ChibokGirls. She insisted we develop core values to guide Bring Back Our Girls (BBOG): hope, unity, motivation, affability, nationalism, integrity, transparency, empathy, equity, discipline and sacrifice (HUMANITEEDS). These core values have been instrumental in making us a disciplined movement.

Aunty Oby, I am so grateful to God for bringing us together, despite the tragic reason for our meeting. You have shown me that the traits people have tried to shame me for are the very tools I can use to help others. I realized that the loud mouth that people tried to quiet could be used to unapologetically fight for others. I never had a big sister or aunty who encouraged me to do more. As the first born, I had to fill that role for my siblings. In the one year that I have known you, you’ve been that big sister. When I feel I can’t do something, you give entertain no such nonsense. “Aisha,” you say, in that voice that brokers no argument, “You have to do it.”

Everybody need such a voice in their lives to excel. Under your tutelage, I have done so many things I never dreamed I was capable of doing. Everyone has the capacity to contribute, but they need the right person who believes they can and gives no room for mediocrity.

Aunty Oby, it’s your birthday. May God give you all the best in this world and in the hereafter. Happy Birthday, to my amazing mentor.  I cannot find the words to do you justice, but they are in my heart. I am sending a bear hug to you, and lifting you off the ground to dangle and twirl you all around so you can let go of the world’s problems for a few seconds. You made TIME’s 100 Most Influential People, but you are my person of the decade!  I love you!

« WORLD VOICE: Women In The World
INDONESIA: Explaining Poverty to Your Child »