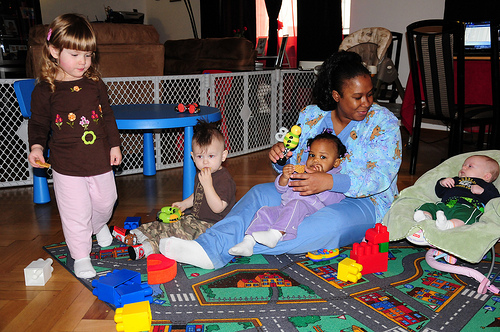 I recently left my job in a poverty law office to start a daycare and pre-school. Before opening my home, I researched every aspect of the business; at least I thought I did. Since I’d been homeschooling since forever, I thought that my new venture would be an extension of what I had been doing. What you can’t find written in pages of wisdom is how to get through the day with young children – that is something you have to experience on your own.

Those who have parented a few kids know about the ups and down; they know all about the changes. They know the normal stuff that one year olds do, and that the “terrible twos” could actually happen at three…which would make it the terrible threes wouldn’t it? (That’s another story.)

Most parents know what “this” cry means, and they come to understand what “that” look is all about. For example, I know it’s potty time for my one year old when she backs up against the wall (any wall). Kids are classic!

Those who have parented or cared for children know that independence means so much to pre-schoolers and that there is a thin line. They know that nasty habits, bad attitudes and bad manners are not necessarily inherited from the child’s mom or dad…and that these things do NOT equal bad parenting.

As a mom of a toddler, pre-schooler and two teens I know it!  I understand it because I read every manual (then burned said manuals…rubbish mostly, but you didn’t hear it from me). I know what I know because I battled and emerged from the trenches…I’m still standing, but it doesn’t mean I’ve won.  Becoming a daycare provider has made me even more aware of that.

Mostly, little people are great! They are cute and lovable and they really do say the darndest things. They make funny faces, tell silly stories – some made-up, some half-truths. You’ll learn from some that tattle-tailing isn’t really tattling, because it’s true! For some, naps are so passé, and circle time….really? Not only are they know-it-alls, they are also do-it-alls. “Didn’t you know so and so rode a dinosaur once, and so and so’s cousin’s friend’s mother’s aunt’s sister went to China, and really she wanted to take so and so but he was busy going to the zoo.” Yep, it’s true…I love their stories!

What I have learned is that the pain is the gap between their laughter and ability to make you laugh so hard you fall over, and their sensitivity. Once again, it’s a thin line. Like when they’re tired, OR, when they’re tired but don’t know that they are tired – oh boy! Like when they don’t get their way, or when you mention words like “nap” or “vegetables”, or  the word “NO”…even if you whisper it.

The pain is when all hell breaks loose. It’s when they cannot hold it in or keep it together…when they fall apart – to pieces. It’s disastrous!  And if you have a few of them who are tired, weepy, silly…whatever, then in no less than five minutes you will have a conga line of craziness…have you ever witnessed this?

These are the moments when their patience and ability to use words – even one word – seem impossible. This is especially true of my own pre-schooler, who likes to test the waters every couple of hours or so.

Sometimes I want to shout to be heard. I want to get right in the middle and show them who’s boss. It’s so hard! I have to talk myself through it before I can talk them through it.

I have to remind myself that:

3) I cannot become or create chaos.

4) People trust me with their children.

So the days come and go. I don’t always know what I am going to get when a child is dropped off. Honestly, I know so little about the parents…I don’t know what their home environment is like.

I want to do everything that I can to ensure that their time here will teach them a little bit about being heard, and being listened to. I hope to help them become conscious human beings who can assert that they are the centre of the earth, because childhood only lasts for so long. I want them to understand that “no” means “no” – at least most of the time; that there will be disappointments too…but more importantly, that they are treasured.

Photo credit to Herald Post.  This photo has a creative commons attribute license.

« Happy Chinese New Year!
Belgium: 5 Things You Can’t Do Anymore When You Have Children »