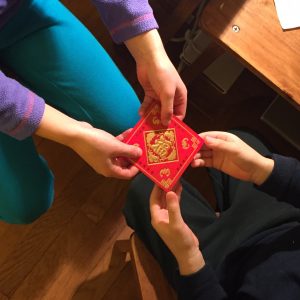 Solar year, 2015—celebrated in most of the Western world— is small potatoes  compared to its lunar counterpart starting today: The Year of the Goat, 4713.

Today, in many countries across Asia, people are celebrating Chinese New Year [CNY]. It marks the first day of the lunar year, which begins with the second new moon after the Winter Solstice.

CNY is the most important holiday for Chinese people world-wide and is celebrated in countries with significant Chinese populations (Hong Kong, Macau, Singapore, Taiwan, Indonesia, Philippines, Thailand, Malaysia and Mauritius).

Even right here in America, in ways both big and small, Chinese families are celebrating the Year of the Goat too.

My husband, a first generation Chinese-American, brought his  Chinese culture into our home and together we have established our own family traditions.

Both our 8 and 5 year old children attend Chinese Language School so our celebrations typically begin there. This year, each of our kids performed in a class skit—one doing a New Year’s song and the other both a song and dance.

Their Chinese school rents out a local auditorium and the celebration goes on for four hours, complete with traditional paper decorations, red lanterns and Chinese snacks of spring rolls, scallion pancakes and fortune cookies (the latter of which I’m pretty sure is a wholly American invention).

And though the four-hour Chinese school celebration feels long and drawn out, it’s nothing compared to the 15-day celebration going on over in Asia.

We live just outside of Boston, a city boasting a large Chinatown. If we’re really motivated, we can fight the crowds and view Lion Dancers, firecrackers in the street and dine on authentic Chinese fare surrounded by thousands of people.

This year, however, our city is buried under record amounts of snow (96.7in/2.5m) so we won’t be making any such pilgrimage.

Sometimes we have friends over and make homemade wontons, a symbolic food representing a pouch of coins, or Hot Pot. Other years we just make sure we eat some kind of Chinese food (either at home or in a restaurant).

We also make sure we always give our kids Hong Bao, little, red envelopes filled with “lucky” money. Since our kids don’t get an allowance, this feels special to them. We never give them very much because it’s the gesture that counts but if they happen to be lucky enough to visit their great-grandmother around Chinese New Year,   they might get upwards of $50.

I know these little traditions are modest compared to mainland China but we hope that in our small way we are instilling in our children a some sense of the deep culture they are part of.

How do you hold on to your cultural heritage? What are some traditions you’ve incorporated into your own family?

This is an original post to World Moms Blog from our managing editor and mother of two in Boston, Massachusetts, Kyla P’an.

The image used in this post was taken by the author.

« NIGERIA: My Hijab, My Pride
CALGARY, CANADA: Tales From a Childcare Provider »