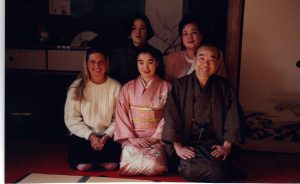 When I was eight years old, my mom moved from our home, outside of Philadelphia, Pennsylvania, to start a new life for herself in Los Angeles, California.

Growing up on the East Coast of the US, in the 1970’s, I had been exposed to only small pockets of Asian, immigrant populations; I knew nothing of the large, well-established Asian populations out on the West Coast.

On one of my first trips out to visit, my mom took me to an area of Los Angeles called Little Tokyo. As its name infers, it was a predominantly Japanese neighborhood and wandering around its streets made me feel like I had been transported to a different land.

I can’t remember if I had ever had sushi before my visit but certainly I had never experienced sushi in as authentic a setting as the restaurant she took me to that day.

The entrance involved crossing a wooden bridge over a small koi pond. There were stone lanterns and bonsai trees. the waitresses were all clad in kimono and the sushi arrived at our table on small wooden planks. I was mesmerized. For me, it was love at first…bite.

This experience had such an impact on me that, from that day on, I was enthralled by anything Japanese. I wanted to know everything I could about the country, culture and its people.

The Japanese were the great inventors of all things prominent in my childish memory: Iron Man, Godzilla, Kero-Kero Keroppi, Hello Kitty, my first Walkman. What a genius tribe they must be!

The rise of my curiosity coincided perfectly with the rise of the Japanese economy. Access to their food, products and even language grew increasingly accessible.

When I was in high school, a small group of students expressed their desire to study Japanese, a language option not yet offered at my school. Fortunately for us, since our school was less than an hour from Yale University—one of the US’s leading colleges—we petitioned for and received permission to get transportation to Yale one evening a week, so we could take an introductory-level Japanese language class there.

When I began researching colleges the following year, I selected only those with an established Japanese language program and study abroad opportunities.

I ended up at a small, liberal arts college in Tennessee with a strong International Studies department. I enrolled in every Japanese class they offered. In my sophomore year, I applied for and was accepted into my school’s Japanese exchange program with our sister university in Osaka, Japan.

At the end of my sophomore year, when all students had to declare their majors, I–along with one other student–petitioned for and was granted permission to develop the school’s first degree track in Japanese Studies. It seemed an auspicious plan, considering the Japanese purchase of the iconic, US landmark, Rockefeller Center, earlier that same year.

I spent my entire junior year of college abroad, studying at a Japanese university, living with two separate Japanese families and absorbing as much of the country and culture as possible for a college-aged kid.

I turned 21 there, a major American coming-of-age. I participated on Japanese sports teams, took painting and pottery classes, studied the culture through the fascinating lens of manga (Japanese comics), dated only Japanese men and immersed myself in the pursuit of understanding all things Japanese. 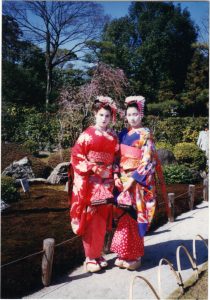 The author and her host sister dressed in kimono

My study abroad experience had an unbelievable impact on my life. It launched my passion and insatiable hunger for travel and Asia, beyond Japan.

I consider my study abroad experience the foundation of the life I built upon it. I know that many of us here at World Moms Blog also have had experiences living and studying abroad; it is one of the many ties that bind us. We are global citizens striving to raise our own children in an increasingly globalized world.

But, as you will learn later today from World Moms Blog Founder, Jennifer Burden, here in the US, accessibility to and enthusiasm for studying abroad are not as prevalent as many of us may think.

So what’s it like in your country? Are study abroad programs prolific on your college campuses? Did you benefit from studying abroad? Tell us about what the experience means to you.

This is an original post to World Moms Blog from our managing editor and mother of two rising, global citizens, Kyla P’an.

The pictures used in this post are credited to the author.