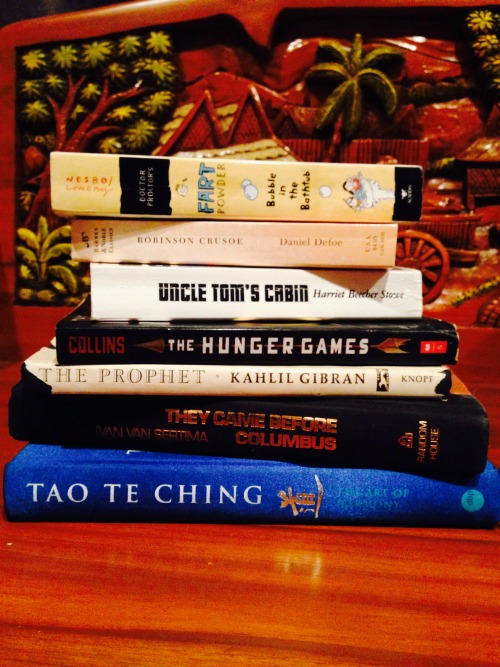 Over the past ten years, my daughter has read quite a few books. She started reading books like The Berenstain Bears series when she was two or three years old; it was a favorite activity to do with her grandma.

By age six she was really into the Magic Tree House series, devouring them as soon as she got them home. She also had some strange requests at age six, like the book Growing Up in Mississippi. Personally, I thought that was a fine book for her to read, except for the third part which talks about the main character’s high school years (and experiences that accompany that time of life).

Of course I was in mom heaven, having a child who was such an avid reader. Her interest in reading spilled over into school, and she participated in various reading programs, and won some medals; which she absolutely loved.

The majority of the books she has read since age six have either been on a required school list of readings, suggested readings, part of a competition (like Battle of the Books), or popular books approved by her peers and teenagers (e.g. The Hunger Games).

Two years ago we told her that she needed to read some classics as well.

We explained that there is at least one reason why certain books are internationally recognized, and how books like The Hunger Games are partially a product of these classics’ influence on the new authors. My assignment for her (as a part of homeschool) was to read Frederick Douglass, a child-friendly version of The Hunger Games.

Her father’s assignment immediately after Frederick Douglass was The Lord of the Flies. She lives with her dad on weekends, but there was no escaping this reading ‘thing’ her parents were making her do! Poor girl! No breaks on weekdays or weekends.

I really tried to get her to enjoy reading Frederick Douglass. She and I talked about American history and how this book was about overcoming enslavement, and that it was important for her to read this as an African-American girl. I told her she could read whatever she wanted when she was finished, or even read a book of her choice simultaneously with this one. Nothing worked. She went from reading a book a week, to taking six months to finish Frederick Douglass’ biography. Lord of the Flies took a year for her to finish, and she really did not enjoy reading it.

After these two parent ‘fails’, I really just wanted her to read.  I wanted her to rekindle the passion she had for reading and so I let her read almost whatever she liked. Her choices are actually pretty good. Some books have deep moral meanings, and some just talk about fun stuff like fart powder for the bathtub.

We used to keep books organized by content, but now we have shelves that carry books about varying subjects. By doing this, we hope that while she’s looking for a book to read, her eye may be caught by East Africa’s History, or The Prophet, or The Human Body, or something else she wouldn’t typically think she’d like.

Do you have a set of boundaries on what your child/ren can read?  If so, what do you base it on? Have you tried to introduce different books to your child/ren? If so, how were they received?

« PHILIPPINES: A Thrill of Hope
BRAZIL: Children and Social Media – A Risky Relationship »