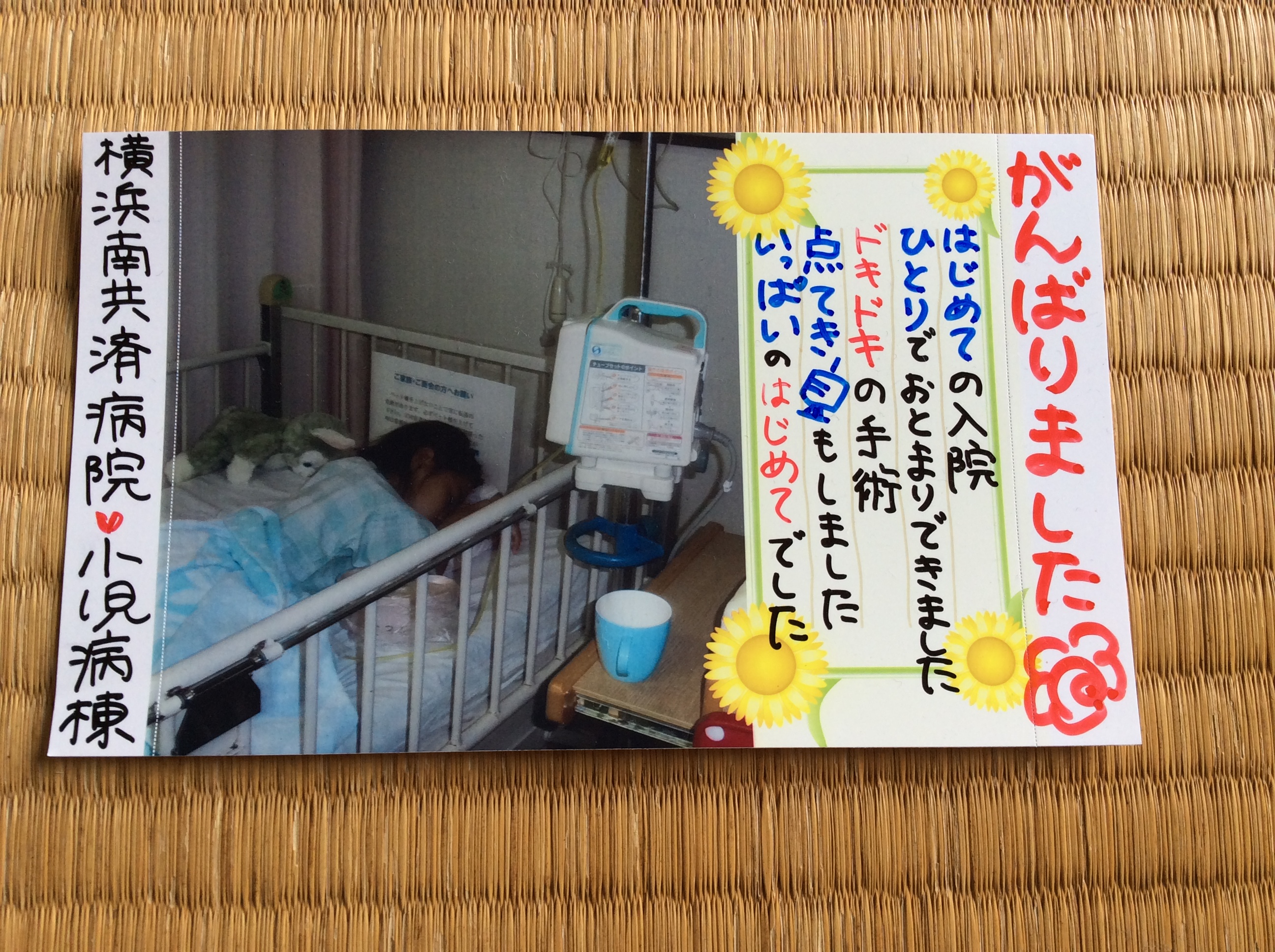 My 6 year-old daughter had her tonsils and adenoids out over summer vacation. She had been diagnosed with sleep apnea several months earlier and since nothing else was helping, finally I reluctantly agreed to the surgery.

I was reluctant because hospital “culture” in Japan is very different from the US, where I am from, and because I knew I would be up against another cultural wall in regards to care for my older child.

This surgery, that requires a one-night stay in the hospital in either the US or UK (according to some quick research on my part,) here in Japan means seven nights in the hospital.

Since hospital rooms are shared, parents are not allowed to stay over night for any except the youngest of patients. Parents are expected to provide clean laundry and cutlery for the patient every day.

The children’s ward had a strict daily schedule, with times when they we’re confined to their beds (which literally had bars like a prison cell,) and times when, if they were well enough, they were allowed to use the playroom.

But absolutely under no circumstances whatever could they leave the children’s ward. And visitors under the age of 15 were not allowed in the ward.

This was a conundrum for me. I have a 9 year old son, who was on summer vacation at the time, and a husband who works 12 hour days, on a good day.

Hospital culture in Japan is strangely at odds with the wider culture in general. A high percentage of children co-sleep with their parents well into their elementary years. That is the cultural norm.

However, the hospital where my daughter had surgery, would not allow parents to spend the night with children over 2 years old.

This particular hospital allows parents of small children to stay until they fall asleep, but for my daughter, that may actually have been worse. Come lights out at 8pm, there was more crying in the children’s ward than from the nursery down the hall.

I had another child waiting at his friend’s house or at Baba’s (grandmother’s) house for me to come home, after all. My husband tried to get home from work at a decent hour, but I think he made it by 7pm once.

The day after the surgery, when my daughter was still feeling ill from the effects of the anesthesia and started bleeding from her nose, I was very grateful that she was in the hospital where I could have a professional attend to any concerns with the push of a nurse-call button.

Around Day 3, though, I could feel myself beginning to fall apart, fiber by fiber. The stress and plain old-fashioned exhaustion were starting to get to me.

My son at home was starting to feel the effects of being shuffled from place to place numerous times a day. My daughter wasn’t sleeping well and wanted to come home. I begged the doctor to discharge her a bit early, even a few hours would be great. His response was that the other child in the same room who’d had the same surgery on the same day was not recovering as well, and it would be upsetting for her if mine left earlier.

Excuse me, what? I thought, blinking several times, sure I had misheard. But I hadn’t.

On the day she was finally discharged, the nurses and staff presented her with a postcard, complete with a photo of her post-op, “to remember them by.” My first instinct was to burn it. Who would want to remember this? But I kept it, an ironic little reminder of the Japanese tendency to have “entrance” and “exit” ceremonies for everything.

I was reminded of a speech the principal of a junior high gave to the student body to announce that I was leaving: “People enter our lives, and at some point we must be parted. We should cherish each of these events.” Perhaps one day my daughter will value the card.

For now, she gets angry every time she sees it. The poor little girl has been waking up at night just “making sure I’m at home” for the past several weeks.

But now I look at the card and I feel profoundly thankful that my kids are, for the most part, healthy and happy. I don’t know how parents, who have to juggle (and it is a juggling with knives-type event, not harmless bean bags) a child’s hospitalization—along with the mundane tasks of everyday life that just keep coming, even when we are least able to deal with them—do it.

I say a little prayer for you every night, moms I do not know, and wish you strength and patience and space to breathe.

Has your child ever been hospitalized? What was it like for you, as a parent?

This is an original post to World Moms Blog from our mother of two in Japan, Melanie Oda.