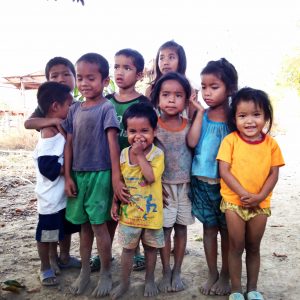 While I still have the opportunity to write another post for the WMB community before leaving Laos later this year, I feel compelled to tell you about child nutrition and the problem of stunting in Laos because stunting is a seemingly invisible problem that can go unnoticed unless special attention is drawn to highlight the issue.
Ethnically, most Southeast Asian people are shorter and have a smaller frames than most other races throughout the world. This fact makes it easy to say that Lao babies and children tend to be small or smaller because of their race.

Yet at first glance Lao children appear to be healthy (and super cute), a closer look and personal interaction will almost always reveal that the children are a few years older than what you had first assumed. I recently met an adorable girl in a northern village at a school where I delivered books by boat since there is no road access to her village. Upon speaking with her (in Lao) I was impressed by how well behaved, articulate and “mature” she was for what I assumed to be a 6-year old. (I have two 4-year old twins so I was instantly optimistic about their potential in just two short years to be as well behaved as this girl.) She turned out to be 10-years old. This has happened time and time again to me, to my colleagues, and to many newcomers to Laos.

Lao children are among the most undernourished in Southeast Asia with 44% stunting of children under 5-years old. It is the single largest contributor to infant and child mortality in the country with 59% of all child deaths related to nutritional deficiencies. Chronic malnutrition predisposes children to higher morbidity and mortality, lower educational attainment, and reduced workforce productivity.

For a country experiencing rapid economic growth and increasing income disparities, fierce external human resource competition puts the country at risk of leaving a majority of the Lao population behind others who will be more able to keep apace. Stunting is a problem that needs be addressed for the immediate wellbeing of Lao children and to be resolved for the future potential of the Lao people.

The Lao government is working closely with experts and development partners on how to tackle this important issue. It is not easy. Poor breast-feeding and weaning practices are widespread. Almost all mothers give food supplements (such as chewed glutinous rice), and pure water, to infants within a few weeks of birth. Harmful practices (such as discarding colostrum) and other food taboos for pregnant women reduce disease resistance for newborns and increase fetal undernutrition. Micronutrient deficiencies, inadequate intake of vitamin A, anemia and iodine deficiency, all further hinder child development.

The current health system is not only faced with challenges of delivering micronutrients, immunizations and necessary vitamins to the most vulnerable population, but they are additionally burdened by the daunting task of changing people’s behaviors to improve dietary habits, increase nutritional intake, and overcoming cultural belief and religious belief obstacles to improved nutrition status among rural and multi-ethnic communities. The task is daunting.

What is being done and what needs to be done?

There are some great organization here making slow but successful strides on a small-scale basis. UNICEF, WFP, IFAD, Save the Children, the Scale Up Nutrition initiative and others who are collaborating closely with government health officials, but resources are scarce, especially in an often overlooked country like Laos.

Hopefully someday, someone will listen and take action.

This is an original post to World Moms Blog by our mother of twins writer, Dee Harlow in Vientiane, Laos. You can always find her writing on her blog, Wanderlustress.

Photo credit attributed to the author.

« TANZANIA: What Does “HOME” Even Mean
NEW JERSEY, USA: Interview with Sarah Hughes »