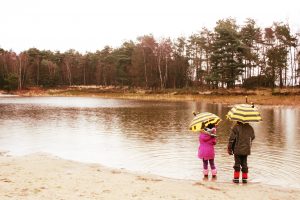 Even before I became a mother, I had a particular wish for my future children. Looking back at several not so fond memories of my childhood, I vowed I would do everything for them to have a better one. They shouldn’t have to grow up too fast. They would not have to feel unwanted, misunderstood or worthless. I would guard their innocence and happiness like a hawk.

The major driving force behind the different attempts of therapy I tried throughout the years, was the well-being of my (future) kids. I wouldn’t allow mistakes in motherhood.

In fact, I didn’t want them to become like me at all. Just like the mother who really tries hard not to show her child how much she is freaked out by spiders, in order not to raise a little arachnophobic like herself. My list of not-to-pass-ons was just longer: low self esteem, perfectionism, fear of failure, social clumsiness, easy overstimulation and of course CFD: ‘continuously fretting disorder’.

The first five years of motherhood, I had the impression I could accomplish all this. I actually felt like the perfect mother: patient, involved, crafty, warm. I even managed to stick to my not-to-pass-on-list.  It would cost me quite some effort, but I would not interfere when my son was building a crooked tower, so he could not catch my perfectionism. Trying not to pass on perfectionism while desperately trying to be a perfect mother.  It may sound absurd now, but back then, it totally made sense.

Three years ago, my perfect balance in motherhood shifted drastically.  When our son turned five, we couldn’t ignore anymore that he was going to develop at a speed different from his peers. At the same time, our adopted daughter arrived, aged two and a half.

They both forced me to face my demons better than any therapy has ever done throughout the years.

My son and I, we discovered developing an intelligence and sensitivity far beyond our physical age, is a struggle we share. Where his friends will watch a grazing cow on a field trip and complain about the stench, he will likely try to understand why this mammal has four stomachs, how to measure the circumference of the pasture and how long it would take for the cow to eat all that grass. And how much dung it would have produced by then, of course. His sense of humour is still a seven year old’s.

My daughter and I, we’ve been battling childhood trauma and attachment disorder together. We cried together in the shower numerous times, holding each other fiercely. The battle has been rough. It still is. Sometimes I just can’t comfort her like I should, because I need comforting myself.  But she amazes me with a resilience I just can’t manage. She might be  jumping on the trampoline and singing imaginary happy-songs, while I crash on the couch to mentally recover from holding her mourning and kicking little body for over half an hour.

It has been extremely painful to see my least fond childhood memories revive in my kids.

Comforting a son that feels like an alien, desperately trying to cover up his super powers because he just wants to blend in. Reassuring a daughter that follows me around the house like a puppy because she just can’t believe she won’t be abandoned again.

Painful. Heart wrenching. And feeding the CFD by the tons.

However,  I’m seeing now that our struggles do not necessarily have to be the same. Because, you know, they have me. Of course I can’t protect them from being hurt. No mother can do that for her children. It’s one of the curses of being  a mother.

But as it turns out, as a ‘damaged’ mother, I might be the perfect guide for my heavy-hearted children.

I’m teaching my son first handed how to make use of his extraterrestrial powers, without a need to blend in. I’m even coaching him in failing and making mistakes without believe it’s the end of the world. I surely acknowledge how important that lesson is. He’ll get it much earlier than I did.

I’m confidently ignoring outsiders’ advice on how to deal with my daughter’s anxieties, since I recognize how she feels. When she’s grieving, I guard her like an eagle that will not allow anyone to question or mock her tears of grief. I’m determined to give her what I never got. I will make her feel loved and understood. Unconditionally.

Me, I’ve only discovered how to find happiness after a painful and lonely journey.

I intend to show my children all the short cuts.

They will have a splendid childhood.

How do you see your own childhood reflected in your children? Is it mostly warm or can it be painful as well?

« What Can Americans Do for Abducted Nigerian Schoolgirls?
SOCIAL GOOD: Save The Children’s 2014 State Of The World’s Mothers Report #SOWM »