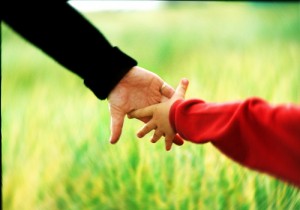 Recently, while checking out at the grocery store my 6-year old daughter wandered a few aisles down to chat with someone while she waited. In child-friendly Indonesia, this is pretty common.

Though my son is generally more wary of people, my daughter is naturally outgoing and enjoys “making friends” wherever we go – usually chatting away in English about school, her friends, her cat, etc.

My son soon went over to join her while I finished paying. As I started to wheel the shopping cart in their direction, I looked up to see that my daughter was giving this man a giant hug around the waist.

Somehow we’d missed out a key lesson from Stranger Danger 101.

We quickly left the store, parked the cart on the sidewalk outside and discussed the fact that it’s not appropriate to hug or touch people that are not our friends or family. I left it at that for the moment, yet days later I found myself still reflecting on the experience and how cultural variables have shaped my thinking.

Growing up in the US, child safety rules were ingrained from a young age, including the widely used “stranger danger” warning that is intended to keep children safe from adults they don’t know.

In Indonesia, it is not so black and white. Typical rules such as “Don’t talk to strangers” can be tricky, if not impossible. Jakarta dwellers are extremely friendly and it is common to talk with and be approached by strangers wherever you go. For me, these kindly interactions are one of the joys of living here and it’s often the presence of my children that sparks the most interesting exchanges.

Another rule, “Don’t accept gifts from strangers,” can also be difficult to avoid. My children have been offered sweets by security guards and local treats by waiting area strangers. We may not always partake of these offerings, but there are times when it would be impolite to refuse them.

Children in particular attract a great deal of attention in Indonesia and strangers frequently pinch cheeks, touch hair and even take photos. My kids don’t usually appreciate this, but it can be a good opportunity to explore personal boundaries and what is comfortable or not.

Not long ago, an adoring Grandma-type reached out to stroke my daughter’s hair while she was washing her hands in the airport restroom. My daughter recoiled and then shouted “NO! I don’t like it!” at the top of her lungs. Although she probably shocked the small tour group of elderly ladies, her boundaries were clear.

In terms of larger safety concerns, it is interesting to consider how perceptions of danger in different contexts – and perceptions of safety – influence my parenting.

The recent article by Hanna Rosin,”The Overprotected Kid,” raises some important points about these perceptions:

“When you ask parents why they are more protective than their parents were, they might answer that the world is more dangerous than it was when they were growing up. But this isn’t true, or at least not in the way that we think. For example, parents now routinely tell their children never to talk to strangers, even though all available evidence suggests that children have about the same (very slim) chance of being abducted by a stranger as they did a generation ago. Maybe the real question for sharing is, how did these fears come to have such a hold over us? And what have our children lost—and gained—as we’ve succumbed to them?”

Like any parent, I want my children to be safe. However, I don’t want them to grow up in an atmosphere of fear and mistrust. To me, rather than emphasizing stranger danger, it seems far more useful to instill confidence and teach them to recognize and avoid certain situations, rather than people in general.

I hope that I can equip my children with the skills, knowledge and strategies they will need to protect themselves and be safe but not scared. Obviously, it’s an ongoing process but one that is particularly important for our family as we move between countries and as our children grow up and encounter new situations.

How do you navigate cultural norms and perceptions related to child safety?

This is an original post for World Moms Blog by Shaula Bellour, mother of twins and now living in Indonesia.

« TANZANIA: Haves & Have Nots
NEW JERSEY, USA: How many moms does it take to raise a child? »