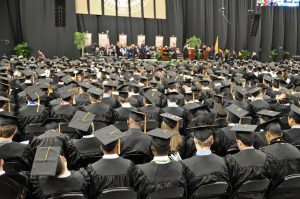 But then, five years ago, something miraculous occurred: my life completely and utterly fell apart and I was forced to rebuild from almost scratch. I can attest that hitting the utter rockiest of bottoms can be a lifesaving event. Somewhere in that process, I began to make valuable changes to how I thought of myself.

Then, almost on a whim, I decided to return to college in the fall of 2008. My previous attempt to obtain a higher education had ended poorly over a decade prior but I knew that this time I was ready. I like to joke that my life has been a series of halfhearted attempts where I rarely finish what I start. I knew (hoped!) that this time would different.

This is not to say that, over the past four years, there were many times that I wanted to give up. As I worked full time, went to school full time and tried to be a good mother, there were always things that ended up being neglected. If not for my mother, who made sure that my boys were well cared for and my fiancé, who made sure that I was well cared for, I might not be receiving my Bachelor degree today.

The other thing that I now know to be certain is that educating yourself, especially as a woman, is one of the greatest benefits that you can give to your self-esteem.

My education has, without a doubt, enhanced my ability to take care of myself and my family. It has also given me insight and intelligence into subjects on which I was previously clueless. All of these factors have done more for my self-worth than I ever dreamed possible.

The running dialogue in my mind has been replaced with much more positive affirmations. What I know for certain today is this: I am smart, I am capable and I am absolutely good enough.

What changes have you made to better yourself and your life? Have you made the decision to further your education?

This is an original post to World Moms Blog from Margie Bryant, recent college graduate!

http://www.flickr.com/photos/willfolsom/ photographed the image used in this post. It holds a Flckr Creative Commons attribution license.