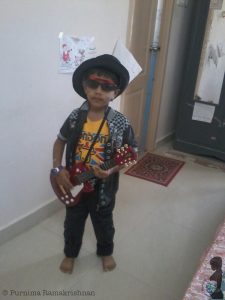 Purnima’s son dressed up as a ‘Rockstar’ for the Fancy Dress Competition.

Here in India there are a lot of competitions conducted for children in a healthy way.  Our son recently took part in a competition in early November.  You see, it is Children’s Day on the 14th of November and the kids who win are awarded on that day.

It was a fancy dress competition.  He was all dressed up.  He had reached the final round after clearing two intermediate rounds. He dressed up as a ‘Rockstar’ for the first round and then as ‘The Earth’ for the second round. For the finals, the topic was a bit tricky. We had to dress up depicting any opposite. So I was thinking of good and evil and hot and cold and such things. But he came with Indoor and Outdoor games. Maybe they are not really opposites, so I got a confirmation from the teacher-in-charge and then dressed him up to depict Indoor and Outdoor games.

And just when we were waiting for his chance to get on stage and perform, there was a mother, whose child’s only competition was my son.  She came up to us, and tried to discourage my son and demotivate him.  I tried to shield him away from her and her stinging words.  She joked about it so that I wouldn’t take offense and complain…but tried to do the damage nevertheless.

I asked to be excused because our turn was coming up. No, she didn’t leave us alone. Another parent understood what was happening and tried to get us some peace, but no, it was not our day.

So, I said we needed some air and came out of the performance room. I could see that my son was beginning to get visibly affected by this lady.

Steer him away from envy,
if you can,
teach him the secret of
quiet laughter.

In the corridor I told him to forget that lady and tried to tell him he could perform better in spite of all this anyway. We talked about the glitter packs we purchased recently. And then I told him I had some candies and chocolates for him. We spoke about our impending trip to my ancestral home. We talked about all that we would do on reaching there. We talked about the places we visited the last time we went there. I distracted him and made him forget the lady and her words to the best of my ability.

And finally I told him again that when he was ready, we could go back in and perform.

Let him learn early that
the bullies are the easiest to lick… Teach him, if you can,
the wonder of books…
But also give him quiet time
to ponder the eternal mystery of birds in the sky,
bees in the sun,
and the flowers on a green hillside.

He was not ready.

So I told him it was okay to not win the competition. But it would be great to win it too. I told him we would get him a surprise gift whether he won or not. So his reward (present) was assured anyway. I told him the next time someone comes and tries to bully him or demotivate him, he should ignore them or just get away from the place. Or if it gets unbearable, tell them to work on bettering their performance.

And then I said, “Trust your efforts. Trust your confidence.” I don’t know how much he understood. But I spoke to him like I would speak to an adult.

“Maybe next time I should ask that lady to mind her business,” my son said at last.

In the school teach him
it is far honourable to fail
than to cheat…
Teach him to have faith
in his own ideas,
even if everyone tells him
they are wrong…
Teach him to be gentle
with gentle people,
and tough with the tough.

“But they won’t allow me if my turn is missed,” he said.

Try to give my son
the strength not to follow the crowd
when everyone is getting on the band wagon…
Teach him to listen to all men…
but teach him also to filter
all he hears on a screen of truth,
and take only the good
that comes through.

“We do not have to compete. We do not have to win. We can just chill out if we wish,” I told him. Some elder boys, maybe early teenagers came our way. They smiled and chatted with us for a while. And they asked him to perform in front of them. He did. They said he was awesome. Go on, go fast and get the first prize, they said. And they moved on. It must have been their break time, I believe.

Teach him if you can,
how to laugh when he is sad…
Teach him there is no shame in tears,
Teach him to scoff at cynics
and to beware of too much sweetness…
Teach him to sell his brawn
and brain to the highest bidders
but never to put a price-tag
on his heart and soul.

We went in only to be ushered in immediately on to the stage. One of the first grade teachers held the microphone for him. And he started performing, the star, that he was. And suddenly he faltered. I held my breath. Maybe he remembered that lady’s words?  Her demotivation?  Was her negativity was getting to him? I hoped not!

He went silent. My heart cried. I willed him to continue. He spoke one more sentence…and went still again. This wonderful teacher told him to conclude it if his performance was over. He stared blankly at her…5 seconds…10 seconds. She directed him to thank the guests and leave. He did that.

Teach him to close his ears
to a howling mob
and to stand and fight
if he thinks he’s right.
Treat him gently, but do not cuddle him,
because only the test
of fire makes fine steel.

She later asked him what went wrong. He did not confide in her. And another teacher told him she expected more from him because he was her star.

“Amma, I will get a prize, I am sure,” he told me that evening when I took him to the school cafeteria.

“I know I faltered. But I will still get a prize,” he said once more.

Is that confidence or over confidence? Or dreaming on?

I waited for the results. A few teachers came to the cafeteria for a cup of tea.  “Hey, aren’t you the guy who was amazing on the stage up there?”

“Yes, I am that amazing guy,” he said in all his innocence. And they all laughed.  I kept nodding and looked away. I did not know what to say because I thought they must have mistaken him for someone else.

“You talked about indoor games and outdoor games, didn’t you?” the other teacher asked.  Ok, that was us. No mistaken identity here. We were ‘amazing’, huh? I thought we faltered.

This is a big order,
but see what you can do…
He is such a fine fellow,
my son!

The results were announced that evening on the website.  That lady’s child, whose sole competition was my son, got a prize.  We got a prize too!  There were seven prizes given away and we were somewhere in the middle.  No, not the rock bottom like I anticipated.  I know his real capabilities, so I know he is capable of more, but this was still sufficient enough for a first grader to get a prize.

We came home and spoke at length about this experience.

The world is not a beautiful place. It is not an ugly place either. It has evil men (and women). And some great people too.  I do my best to give him a good mental and emotional balance. And then this world he grows up in is going to be his best teacher. He has to learn from his experience.

And I hope you also read Abraham Lincoln’s poignant letter to his son’s teacher … AND TO ME.

What lessons have your young children learned from their personal experiences in this beautiful and harsh world?

This is an original post to World Moms Blog by Purnima, our Indian mother writing from Chennai, India. Her contributions to the World Moms Blog can be found here. She also rambles at The Alchemist’s Blog.

Photo credit to  the author.

« INDONESIA: Finding my Momdentity
Saturday Sidebar: What is the age difference between siblings in your family? »