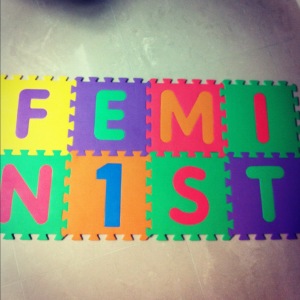 Okay, I’m just going to come out and say it: Feminist. There, I said it. We can all absorb and try to move on.

I joke, but, like all jokes, there is a kernel of truth within. I think in the case of feminism, there is more than a kernel of truth to the fact that, for many, the word feminist has a negative connotation.  It brings to mind gangs of hairy arm-pitted, bra-less, angry, man-hating women.

Stereotypes, as we all know, are both harmful and irresistible. We love to sort people into categories to differentiate them from ourselves. To be sure, there have been angry feminists, just as there have been angry vegetarians and, I imagine, angry croquet players. Anger is an emotion that cannot be attributed to one particular group; although I do find it interesting that it is most often attributed to groups that are systemically discriminated against. As if anger is not a rational response to injustice.

I want to raise a feminist, and I’m wondering the best way to go about it. The best definition I’ve ever come across for feminism was written by Bell Hooks in her book Feminist Theory: From Margin to Center. In it, she writes,  “Feminism is a movement to end sexism, sexist exploitation, and oppression.”  Feminism is not about man-hating, or even man-disliking. It’s not about women becoming more powerful than men. It is about doing away with the systems that oppress and harm us all, men and women alike. To assume that men only benefit from sexism with no negative consequences is a mistake. They are harmed by it just as much as women are, which is why I want to raise my son to be a feminist. If we raised all of our children, sons and daughters, to be aware of and opposed to sexism, sexist exploitation and oppression in all of its forms, perhaps we could finally break down the systems that foster them.

Here in South Korea, as in my home country of the U.S., sexism is rampant. Working women in South Korea earn about 63% of what men in the same positions do. What is especially troubling about this is that South Korean women are just as well-educated, if not more so, than most men in the workplace. The difference in salary is based solely on gender. South Korean women are pressured to leave the workplace once they have a child, which has resulted in South Korea having one of the largest populations of well-educated and underemployed women. There are many firms in Korea who have no women in any executive positions.

Outside the workplace, women fare no better. The Confucian principles that guide all aspects of society here dictate that women be submissive to men in every way. Social harmony, not equality, is the ultimate goal of Confucianism. and it is deeply entrenched. To look around, I would say things are changing very slowly.

Of course, the U.S. is no better. In fact, I would say that the sexism that exists in the States is more insidious. On the surface, we appear to be a society that values equality and fairness, but women are still earning less than men, while their reproductive rights are bandied about by politicians seeking to get into office. Don’t even get me started on the reinforcement of stereotypical gender roles in almost all American entertainment.

What’s a feminist mother to do? I look at my sweet darling boy, innocent as can be. All children are feminists by nature, having no interest in oppression of any sort. And yet, at some point, we all learn the way things work. We all learn what it means to be a man or to be a woman by the gendered society in which we live. That’s not what I want for my son. I do not want him to grow up thinking that any role that doesn’t suit him needs to be fulfilled. I don’t want him to think that being a man means being “masculine” all the time, or that doing things others would describe as “feminine” diminishes him in some way. The fact is that there are more differences among men and women than there are between them, and all behaviors do not need to be categorized into masculine or feminine. They are all just human behaviors.

I know the best way to teach him anything is by example. My spouse and I do our best to model fairness, equality, respect, and freedom of expression in our marriage and in our lives. Will this be enough?

What about your family? Do you identify as a feminist? Are you trying to raise feminist children? How do your culture’s traditional gender roles differ from your own expectations? Have your children conformed to societal expectations that are in contrast to the expectations in your home?

Photo courtesy of the author.

« ISRAEL: Sometimes The Right Thing Is To Be A Bad Mother
SOUTH AFRICA: Daddy’s Boy and Mommy’s Girl »